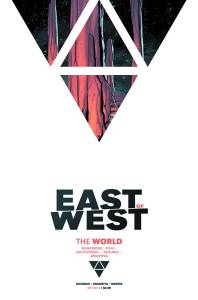 East of West: The World is a one-shot guide to the East of West world, subtitled “Sourcebook | Atlas | Encyclopedia | Timelines | Apocrypha.” It serves as a reference to the convoluted history and politics of the series, as well as an intermission before “The Apocalypse: Year Two,” the next big story arc.

It does open with “The Ride,”  a short six-page story about the Horsemen of the Apocalypse, which is a lot more inviting than going straight into the reference material. Then it devotes a two-page entry to each of the seven political entities in the story, with a map and a summary of their history, strengths, and weaknesses. Finally, there is a long timeline giving “The History of America” in this alternate history, starting with 1908 (A fire in the sky) through to 2064 (Rebirth of the Horsemen; The Apocalypse begins), which is where most of the series is set.

It’s clearly intended for people who are already fans of the series, and should be very useful in keeping a perspective on the players and events. I don’t think it really gives any new information, but it’s nice to have it organized for easy reference. I’m looking forward to having it available when I resume reading the series.

That said, $3.99 seems like a pretty steep price to me. I got it as an e-comic in the recent Image Humble Bundle, but I’d think twice before paying full price for a print copy.

This collection has the subtitle “There Is No Us” all over the Web, but I can’t find it anywhere on the book itself. It is a good summary of the action: a summit conference of the Nations breaks down into violence, and war breaks out, with the Endless Nation making the first move.

Meanwhile, Death is still trying to find his son, and so are the Horsemen of the Apocalypse. These seemingly unrelated threads come together with their convergence at the Temple at Armistice, home of the Message. The Temple falls under the attack of the Endless Nation, but not before Death’s son escapes. The Horsemen are convinced that he truly is the Beast of the Apocalypse.

The boy accepts the name Babylon, without really understanding the derivation. And we see that his AI is lying to him (despite assurances to the contrary). It shows Babylon a false image of a desolate land, good only for destruction and rebuilding.

It was useful having the one-shot “East of West: The World” for reference, as it has been a few months since I read the previous collection.

The action picks up here with baby Hazel as a toddler, as promised by the ending of the previous volume. The family is undercover: Marko is a house husband (who wears bandages outside of the house to avoid recognition), while Alana makes a living acting on a television soap opera (which is where the cover image comes from).

The Robots take center stage for much of this arc. Prince Robot IV is still on Sextillion in a brothel when his wife gives birth. He doesn’t learn he’s a father until his wife has been murdered and his son taken hostage by a terrorist. The terrorist engages in a string of casual violence, killing just about everyone he comes across. There’s a wonderful visual when the Prince visits King Robot: the King’s head is such a huge monitor that a two-page splash page is required to show the whole thing. Staples has a lot of fun with the Robot monitor heads all the way through, as they display images showing how they’re feeling or what they are going to do.

Things have been going badly between Marko and Alana. She kicks him out of the house, and he comes back just in time to see their home/spaceship take off, with his family hostages to the terrorist. Meanwhile, Freelancer The Brand comes to writer Heist’s planet seeking The Will, and we meet another cute alien creature from Staples. It’s a seal in overalls named Ghüs (apparently not pronounced “Goose”). We’ll probably be seeing him for awhile, because Prince Robot and Marko show up, seeking his help to track their families.

This series is still a really fun read, despite the massive amount of violent death in this collection! I suppose it’s more cartoonish when we don’t know the characters beforehand.