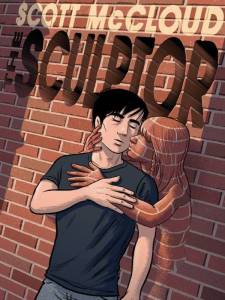 Scott McCloud has been so influential as a comics theorist–most notably in his book Understanding Comics–that his work as a cartoonist can be overlooked. It doesn’t help that his most substantial creative work was his series Zot!, which ran from 1984 to 1991, ages ago in comic book terms. So new creative work from him has high expectations to live up to. At 500 pages The Sculptor also has the look of a magnum opus. McCloud says he worked on it for five years, and it was time well-spent.

The title sculptor is David, a young artist whose promising career has stalled out. He’s literally down to his last dime when he makes a deal with Death: he gets his childhood wish to be able to sculpt anything he can imagine with his bare hands…but he only gets 200 more days to live. Deciding what to do with this gift is harder than he imagined, and meeting the love of his life adds additional complications. So it’s a coming of age story, a story about young love, and a story about creating art and the sacrifices made for it.

McCloud takes one big risk at the outset: his protagonist is not very likable. He’s at a low point in life, morose and full of self-pity. And there’s a sense that a lot of his problems are self-made. He’s made a lot of promises to himself that limit his options. He’s talking this over with his uncle Harry, when he suddenly realizes that the last time he saw Harry, Harry was dead! Hence the deal with Death. 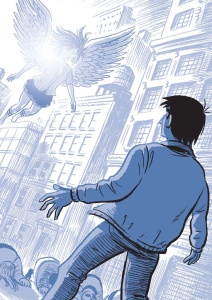 There are a couple of small things that seem to prove that Harry really is who he says he is. And when David leaves the restaurant he immediately encounters a supernatural event on the street, complete with an angel. But then the story pulls the rug out from under us when David attends a party later and discovers that the event on the street was a staged piece of street theater. The party, as well as a gallery visit to meet a well-connected art patron, set up the real-world setting of David as a young artist trying to make a name.

So much of the first chapter (the first 100 pages) is basically a realistic story about a young sculptor, with possible supernatural elements. All of that changes at the end. When the sun comes up, David discovers that he can sculpt any material with his bare hands–which he proves to himself with a steel bridge and a solid block of marble. Death shows up and gives him one last chance to back out, but David accepts 200 days of life in exchange for the artistic gift. 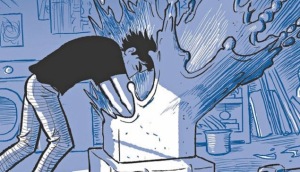 David’s main goal is to make a reputation as an important sculptor, rather than a promising new talent. It’s the kind of artistic immortality you trade a short lifespan for. The usual way of doing that in the fine art world would be via public exhibition, which is a competitive process, and inherently slower than a 200-day deadline would allow. He does attempt to go this route, but encounters one roadblock after another. In the end he has a blinding insight: he can create remarkable public sculptures under cover of night, using available materials onsite. And it works: he quickly gets considerable public notice, although the formal art world is not complimentary.

Some of David’s sculpture

As McCloud pointed out in another interview, we never see the work that established David as a prodigy. Presumably it was in some established style, one that would find ready approval from his patron and the rest of the art world. Everything we actually see is in some sense a failure: it’s outsider art, even if it does represent David’s true individual artistic vision.

But in many ways the focus is on David’s budding relationship with Meg, the actress who played the angel with the street theater troupe. He has applied his usual perfectionist tendencies to relationships, so this is his first serious love affair. Of course it is considerably complicated by his imminent death! He’s hesitant to even become involved at first, then balks at continuing as things become more serious. And the deal with Death carries a penalty if he reveals it to anyone. This subplot nevertheless gives the most opportunity for character development. David must learn to accept help, and slowly opens up emotionally: it really is a coming of age story.

Meg turns out to have a mental health issue, which she refuses to treat with medication. It’s an unnecessary plot device, I think. There would have been plenty of room to explore the relationship without it. 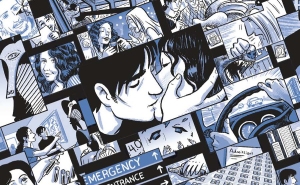 David’s life flashes before his eyes

The conclusion is foreshadowed in the opening section of the book, although McCloud is cagey about David’s ultimate fate until the very end. I know I kept hoping for some kind of deus ex machina to provide a traditional happy ending. Instead it is tragic in more ways than one But it is true to the story. Rules are established, and they are obeyed all the way through. It’s emotionally wrenching, but far preferable to some kind of “it was all a dream” ending.

McCloud has said that he’s not a good colorist, which is why so much of his work is in black and white. The use of a blue tone here was an inspired choice: it softens the impact of the line work, creating a warmer look than a complete lack of color would have. Taken as a whole, the book is a rich experience: powerful and emotionally involving. After one reading it has taken a place in my top ten favorite graphic novels.

Freelance Journalist & Musician; Senior Contributor, All About Jazz.com; writing on comics at mrvertigocomics.com & No Flying, No Tights.com
View all posts by marksullivan5 →
This entry was posted in graphic novels, indie comics and tagged Scott McCloud. Bookmark the permalink.