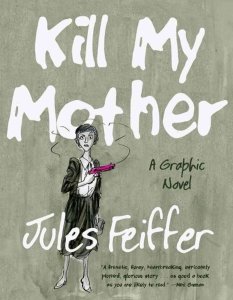 Finally got my hands on a copy of Jules Feiffer’s Kill My Mother, after it had already made some Year’s Best lists. It’s amazing how well his cartooning style translates into a long story, and that he hadn’t created a graphic novel before. It’s a crime noir with a plot so convoluted that it defies simple summary. A mother does actually get killed–spoiler alert!–but the title mainly comes from frustrated children expressing their frustration in the usual “I could just kill my mother” way.

Feiffer has said that he always wanted to draw a noir story, but it took him his whole career to figure out how. This is almost impossible to believe, because his cartooning captures the noir feel perfectly, without looking substantially different from the shorter strips for which he is known. In the course of the story he even manages to work in the singing and dancing sequences I associate with his work. For a few scenes at least, it’s a noir musical!

He has a lot of fun with the traditional noir detective tropes, too. Part One is set in the seedy town of Bay City, and features a stereotypical drunken private eye, who finally gets shot to death with his own gun while wearing women’s panties. I could not make this up. The scene shifts to Hollywood for Part Two. It’s a setting custom-made for artifice and false identities, and the other seedy P.I. from Bay City we met in Part One gets called in to make another hit. He fails at the job too, but does manage to survive his embarrassment. The toughest and pluckiest characters are all women, turning the stereotypical “tough broad” stereotype on its head as well.

The artwork and the twisty plot both invite repeated readings, and I look forward to spending more time with it in the future. 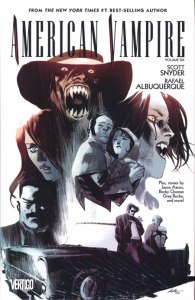 Scott Snyder needed a break from American Vampire before the start of Cycle Two of the series, but he found a really cool way to fill in the gap. This volume collects two one-shots. The first is The Long Road To Hell which features the return of vampire hunter Travis Kidd (“I like to bite them back”). But the focus is on a couple named Billy Bob and Jolene. They run afoul of vampires, and find themselves part of Oscar Brood’s army. They make their escape and are on their way to Las Vegas for a supposed cure before they run into Travis. Their story ends with this issue, but they pick up a mysterious kid named Jasper who may reappear. Snyder and Albuquerque are both credited with the story, but Albuquerque gets a shot at both the script and the art. He does such a good job that I didn’t realize that Snyder wasn’t the writer until I checked the credits later.

The bigger half of the collection is devoted to American Vampire Anthology, which gives a wide variety of creators space to create short tales in this world. Snyder and Albuquerque assume their usual roles for the 1967 Skinner Sweet framing story. Then the timeline shifts all the way back to Colonial times for writer Jason Aaron & artist Declan Shalvey’s “Lost Colony,” a tale of the earliest vampires in the New World. The chronology keeps moving forward from there: Kansas, 1856 is written by Albuquerque alone, with art from Ivo Milazzo in a bright watercolor style that is a dramatic contrast with the usual art for the series.

The rest of the creator list is so strong that I have to list them all: Jeff Lemire & Ray Fawkes tell a Canadian story; Becky Cloonan, Francesco Francavilla, and the Gabriel Bá/Fábio Moon team each cover writing and art duties for their tales. There are also two remarkable teams: Gail Simone & Tula Lotay, and Greg Rucka & JP Leon. This may have been a placeholder, but it came out so well that I’d love to see it done again.

Apparently Mike Mignola had to kill Hellboy before he could get interested in drawing him again. Good as the other artists have been, it’s a treat to see Hellboy’s creator back creating Hellboy comics. It would have been a long haul for monthly readers, though: it took from 2012 – 2014 to get to issue #5, the last one included in this collection. I was wondering why I hadn’t read a new Hellboy story in awhile!

The book opens with “Hellboy: A Brief History” which encapsulates the entire Hellboy history in one paragraph. Here’s the final sentence: “Shortly thereafter he fought a dragon and was killed.” The title means what it says: it’s “The Descent,” not “The Resurrection.” But this tale is very much a continuation of Hellboy’s story. It opens with the witch Baba Yaga telling Sir Edward Grey (last seen in Hellboy: The Wild Hunt) how to find Hellboy in Hell. Sir Edward volunteers to help Hellboy in his journey, declaring that “his story is not finished.”

Hellboy falls into the Abyss, and the monsters start coming right away. I found I was just as involved in Hellboy’s battles as I ever was, despite the fact that he’s dead. What’s the worst they can do: kill him again? Mignola has fun adapting Dickens’ A Christmas Carol (as a puppet show) to introduce Hellboy to Grey. Later he does a similar thing describing the murder of Satan using quotes from Shakespeare’s Macbeth. You have to love a goofy horror comic with literary footnotes.

In short order Hellboy finds himself involved in a power struggle for Pandemonium, which had been deserted by all the princes and ministers of Hell when they heard of Hellboy’s coming. All of the intimations of his high demon status are confirmed, but he still refuses to accept them. Along the way his family history is fully revealed, as well as the story of Sir Edward’s mysterious disappearance.

And Hellboy even has a good old-fashioned adventure, as he helps a mortal who had sold his soul to a devil. Nice to see that there’s room for a bit of adventuring in Hell. One can only hope that Mignola can clear his schedule enough to get back to this series more regularly.