Posted on September 1, 2014 by marksullivan5

I was a big fan of Remender’s previous sci-fi series Fear Agent, and this one has a similar pulp sensibility. On the most basic level it’s an adventure story with aliens. But in this series protagonist Grant McKay, leader of the Anarchistic League of Scientists, has put himself in jeopardy through his experimentation with the titular Black Science. His invention the Pillar allows travel through all the various realities that make up the Eververse, the infinite chain of possible dimensions that branch out from each single quantum event. The breathless first issue introduces the basic concept, while following McKay as he is on the run from aliens trying to get back to his team before the Pillar jumps to another dimension.

I’ve recently been re-watching the television series Sliders, which had a strikingly similar basic concept: a group of explorers sets out to visit alternate dimensions, then quickly find themselves set adrift due to an unforeseen technological breakdown. In both series the team is unable to return to their home dimension because their homing device has failed, and their time in each dimension they visit is determined by a random timer setting. Remender has imagined a much more alien set of alternate realities, though, sufficient to give the story a classic science fiction feel rather than that of alternate history.

In the course of the six issues in this collection the group visits several worlds, with flashbacks filling in back story about the characters and how they came to be here. The perils they face are real–or at least they seem to be–as first Grant’s wife Jennifer is killed, then Ward gets left behind, then Grant himself suffers an apparently mortal injury and gets left behind in the final cliffhanger. The “seems” comes into play with the appearance of an alternate Grant and Jennifer, which opens up the question of which dimension is “real.” The new Grant says that the aliens in this dimension “aren’t real.”

It’s an exciting ride, one which possibly could go on forever. A lot will depend on how Remender handles the incursion of alternate realities. Will dead or missing characters return? If so, will death cease to matter? And can Grant really leave the story this soon, despite being the central character? 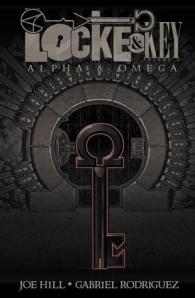 I’ve been enjoying this book very much, so I came to the series conclusion with mixed feelings. On the one hand: no more Locke & Key to read. On the other hand: endings are exciting, but they’re also hard. Will this one be disappointing? I’ll just cut to the chase: TERRIFIC ENDING. Of course at this point anyone who has been reading the series would want to see how it ends. So I guess I want to encourage anyone thinking about starting, or who dropped out somewhere along the line.

Now for the hard part: how to talk about what happens in this volume without completely spoiling it. Lucas “Dodge” Caravaggio has been the big villain of the piece, revealing himself more and more as the story progressed. By the time we arrive at this collection, he has taken control of little Bode Locke’s body, giving him an especially innocent appearance for his evil activities. As the story opens he retrieves the Crown of Shadows–giving him control of an army of deadly shadow demons–and empties out the flooding in the Drowning Cave which had prevented access to The Black Door, the gateway to a demonic dimension. Even if you have not been following the series, it should be clear that this would be Very Bad.

So an epic battle ensues, one which threatens all of the members of the Locke family, and takes many of their friends. This is not a comic in which death is temporary, although some things can be reversed through magic. It’s remarkable that Hill is able to walk that line so successfully, because there is the potential for magic to be sufficiently capricious to render all conflict and change meaningless. I never felt that as a reader: everything felt like it mattered.

This volume collects Omega #1-5 and Alpha #1-2, which implies a clear ending and an Afterward. But in fact the action continues right into Alpha #1; only Alpha #2 (which is titled “Epilogue: The Last Door”) deals with wrapping up loose ends. It does this very powerfully: it is moving, surprising, and satisfying in equal measure. It is also a new beginning, as implied by the title. Don’t miss it. 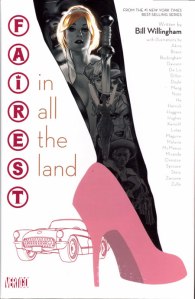 Fairest: In All The Land
Written by Bill Willingham, illustrated by A Wonderland of Artists
Vertigo Comics

At first glance this original graphic novel from the Fables spinoff series Fairest looks like a collection of very short stories, a more extreme version of the original graphic novel Fables: 1001 Nights of Snowfall (I have seen descriptions that describe it that way). But in fact it is a single mystery story which casts super-spy Cinderella in the role of reluctant detective as she has seven days to solve the series of murders of the most glamorous women in Fabletown. It is very much set in Fairest and Fables continuity, assuming not only that the reader is familiar with the entire Fables cast, but also that they have been following both series up to the point in 2013 when this book was published (originally in hardcover, a paperback edition is scheduled for Fall, 2014).

The story begins with narrator The Magic Mirror describing the situation he finds himself in: the vast magical chamber that was once the Fabletown Business Office is lost somewhere in the endless worlds. His companions are the disembodied heads of the Wooden Soldiers (106 of them) and Frankenstein, plus twelve tiny Barleycorn Women. The Mirror’s glass is shattered in an apparent accident. When he recovers a few days later he is astonished to see a set of tire tracks, which no one else can explain: somehow a car arrived and departed without being seen. When the Mirror focuses on the car, he finds the sports car which the fairy called Hadeon the Destroyer was transformed into.

The car arrives in Fabletown, and shortly thereafter Cinderella is summoned to witness two bloody murders: the witch Morgan Le Fay and the oracle Mrs. Ford, Before she died Mrs. Ford wrote a list of notable Fables women, each one “the fairest in the land.” Cindy resolves to visit all of the people on the list, treating them as her preliminary list of suspects. Long story short: she finds each woman murdered just before she gets there, always with a second murder on the scene. Her list of suspects quickly transforms into a list of potential victims. This is a fair play mystery, so the reader is provided with the same clues Cinderella has.

It takes a long and twisted path to the conclusion, as Cindy gradually learns to sharpen her detective skills. Of course she solves it in the end, but not without a considerable cost. Some notable Fables characters remain dead at the conclusion. Or at least as dead as Fables can be: the really famous ones are almost impossible to kill permanently.

A final note on the structure of the book. It is told in the form of two illustrated prose chapters that bracket thirty comic book stories. The list of illustrators has twenty-four names, truly “a Wonderland of artists.” This means that the artist changes every few pages, which I found disorienting at first, but I quickly got used to it. The story manages to be a consistent tale and an artist’s showcase at the same time.