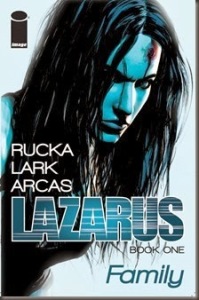 Writer Greg Rucka and artist Michael Lark depict a dystopian future in Lazarus. I’m going to borrow Image’s summary of Issue #1 to describe the setup: “In a dystopian near-future, government is a quaint concept, resources are coveted, and possession is 100% of the law. A handful of Families rule, jealously guarding what they have and exploiting the Waste who struggle to survive in their domains. Forever Carlyle defends her family’s holdings through deception and force as their protector, their Lazarus.” In the first couple of issues there has been no explanation given for the situation, but there is clearly a huge disparity between the haves and have-nots. There are actually three classes of people: Family members (a small group of people with absolute power and control over all resources); Serfs (a larger group who serve the Families directly); and the Waste (unaffiliated people, the vast majority of the population).

Forever (Eve to her friends) really is a Lazarus. In the opening scenes she is killed quite thoroughly, yet within minutes she rises up and kills her attackers. She is conflicted about her assassin’s role, which is a concern for the family, because she clearly is a tool above all else. The family members are a bickering, unattractive bunch, and from the hints they drop it appears that Forever is actually a clone. Her membership in the family is a fiction everyone maintains, but she is actually genetically designed to take orders from family members.

So they are concerned when she is sent on a secret mission, which she refuses to reveal. At the end of the second issue (of four in the collection) she meets with the competing Family Morray, alone.

There is potential for violence in the situation–and there is a brief incident–as Forever is initially treated like a prisoner. But she swiftly shifts to guest status, as she has come as a representative of Family Carlyle, sent to negotiate with Family Morray. The negotiations go well, but in the process it is revealed that Jonah (the youngest Carlyle son) has been colluding with Morray. Back at the Carlyle compound, Jonah and his sister Johanna plot to assassinate Eve on her way back from the meeting, to instigate the war they think is necessary.

The assassination attempt fails, of course. In the process it further cements Eve’s friendship with Joacquim Morrary, the Morray Lazarus. I’m sure this will factor into future stories. Jonah escapes with his life, but Johanna has double-crossed him and placed full blame on him for the plot. This, too, will no doubt be a factor in the future.

Rucka and Lark have come up with a unique twist on the dystopian future story here. The political intrigue plays like a medieval monarchy (no doubt the term “serfs” was carefully chosen), but the setting also allows for commentary on the current world economy. It’s nice to read a comic series that moves so quickly, also. All of this happened in the space of four issues. The collection also includes a four-page Prequel story that illuminates the relationship between Forever and her father. 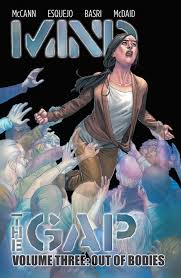 Mind The Gap Vol.3: Out Of Bodies

This collection ends Act I of the series with a bang. But first it answers a great many questions. The opening event certainly doesn’t look conducive to resolution, though: Elle’s spirit is torn into pieces, forcing her to inhabit several coma patients simultaneously. While everyone she knows is coping with the situation, the Elle Team (I’m not sure what else to call them: it’s the group of Elle’s friends that created the evidence wall we’ve seen, who are working to solve the mystery and save her from whatever the shadow Jairus group is trying to use her for) manages to get a sample of the Jairus solution.

When the solution is analyzed, Dr. Geller gets a surprise: it is clearly based on genetic research she performed while working for a pharmaceutical company owned by the Peterssen family. It’s a formula designed for freezing an organism then bringing it back to life. Turns out that the family has been working on a way of defeating death for generations. A series of flashbacks (illustrated in a contrasting style by Dan McDaid) takes us all the way back to scientists working for the Nazis in Germany. Despite not actually being Nazis or doing anything unethical, the scientists are all eventually executed for war crimes. But not before sending their sons to Argentina, from which they find their way to the United States. This unexpected plot element explains a lot about the nature of the Jairus research project, as well as tying Geller into the story much more closely than it appeared before. The flashbacks sound like an added complication in an already complicated mystery, but in fact they are straightforward narrative. I found them downright relaxing: no added mystery to solve.

But there’s more. The central mystery of Elle’s collapse on the subway platform at the beginning of the series is also answered, in probably the last way anyone could have expected. The Elle Team has figured out enough to know that they must keep Elle’s comatose body away from Jairus. Elle herself forces the issue by reentering her body, which results in her coding hours before Jairus expected. As they are maneuvering to transport her to the Jairus facility they discover that her body has disappeared from the hospital.

As usual the collection includes several extras. There’s sheet music to the song “A Way Back to Then” which the characters sing at one point, which is a real song from the musical [title of show] which McCann has previously credited with being part of the series inspiration. He also reveals that the story is surprisingly autobiographical: Elle’s medical condition is based on the one that McCann himself had as an infant. Finally, there are several variant covers. 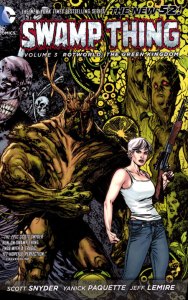 Scott Snyder’s run on Swamp Thing comes to an “epic” end here (“epic” is DC’s current favorite adjective, and it is a fair description of this story arc). The collection also includes two Animal Man issues which are necessary for the full story. When we last left the Swamp Thing (avatar of the Green) and Animal Man (avatar of the Red) they were about to enter a portal to go into the Rot and bring the battle to the Rot homeland. This turns out to have been a bad idea: it was Anton Arcane’s plan to lure them in, so he could keep them there (where time moves differently than in the real world) while the Rot takes root in the world.

The two heroes return to a world transformed, where the Rot has infected nearly everything, including the superheroes. The next several issues are taken up by the odyssey to Anton Arcane’s castle in Blestemat, in Europe. Abigail Arcane, Swamp Thing, and Amimal Man all make their way there, because it is the location of the Parliament of the Rot. Abby arrives first, alone, and makes her secret way into the castle to face Arcane. Buddy Baker and Alec Holland each arrive about the same time, with armies of superheroes. The War of the Rot involves all of these players, facing a group of superheroes transformed by the Rot.

So they must find a way to defeat powers like the Flash, Wonder Woman, and Superman. But ultimately they must get past Anton Arcane, the current Avatar of the Rot, and the architect of the Rotworld. The battle is epic–there’s that word again–and includes such unexpected events as Frankenstein becoming a Green Lantern (I’m guessing that wasn’t reflected in the Green Lantern titles, but it would be cool if it was).

In the end the life forces find an unlikely ally. The Parliament of the Rot regret their choice of Anton Arcane to be their avatar: the Rot never wanted to upset the balance of nature. Rotworld was purely Arcane’s mad idea. So when Swamp Thing and Animal Man travel to the Rot again to help Abby in her struggle with Arcane, they get unexpected help. Abby finally accepts the mantle of Avatar of the Rot, an office which she has tried to escape for her whole life. This completely transforms her in both her role and her appearance, which seems likely to have an impact on the series going forward.

Hopefully this will be the last brush with super-hero crisis event nonsense, because this one nearly lost me. I haven’t read all of the Animal Man issues relating to it yet, and I’m not sure I want to. But I am genuinely curious to see where new writer Charles Soule goes from here, so I will certainly stick around at least as long as the next collection.