Sean Murphy’s Vertigo miniseries has a surprisingly unique premise (surprising that no one had used it in a story before, especially given the huge impact of Jurassic Park). DNA lifted from the Shroud of Turin is used to create a human clone of Jesus Christ. This being the 21st century, the clone is implanted in the womb of a virginal teen mom, who gives birth on live television as part of a reality show. Mother and child immediately become virtual prisoners, as Christian fundamentalist protesters threaten their safety.

Their main protector and ally is bodyguard and security chief  Thomas McKael, an ex-Irish Republican Army member with a string of killings to his credit. In fact the book opens with him witnessing the death of his parents in a shootout, the beginning of his IRA indoctrination. The series is arguably as much about his story as it is about the clone.

Murphy uses this unlikely mix of characters to explore the nature of religious faith, scientific ethics, and the contemporary cult of celebrity. 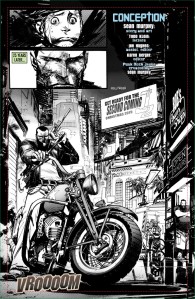 Thomas just before the Second Coming

The kid called Chris becomes an instant celebrity, his every waking moment broadcast to a huge audience. Religious zealots either love or hate the show, and scientists fear the implications of the whole experiment. Is this really the Second Coming, or something far darker?

Almost all of Murphy’s characters have one thing in common: they want to do the right thing, but they’re conflicted. Geneticist Sarah Epstein has doubts about the whole cloning project, but she needs financial support for an algae she is developing to combat global warming. Thomas McKael doesn’t completely trust the J2 project, either, but he is doing penance for the murders he committed on behalf of the IRA. Gwen Fairling wants a better life for her family, but she has no idea what life as the clone’s mother will be like. Rick Slate is the man behind the entire project, and he’s the only straightforward adult character: a manipulative bastard with no apparent moral sense whatsoever. He’s basically a charming sociopath, a two-dimensional cartoon compared to the rest of the cast. Only Chris is completely innocent, at least at the beginning. He starts out embracing his role as the reborn Christian Messiah, at one point even attempting to walk on water in a swimming pool, where he nearly drowns. As he begins to understand the forces behind his creation he embraces atheism and punk rock, becoming the “punk rock Jesus” of the title.

As the clone Chris begins to grow up the story goes in several directions. When it becomes apparent that Chris would not be safe in the outside world, the group becomes isolated on the J2 island compound. There is continuous friction between Rick and those who want Chris to have some sort of normal childhood (Gwen, with support from Thomas and Sarah). Rick engineers “miracles” to prove Chris’s divinity, which further alienates his “family,” and offers further proof that the clone is not the Second Coming. At one point a desperate Gwen escapes the island (with help from Thomas), but they soon discover that it really isn’t possible to go unrecognized in the outside world: they truly are prisoners of their celebrity status.

Gwen is finally sent away, as she has become a complete liability in the “mother of God” role. There is a fantastical scene in which an angel rescues her as she attempts suicide by jumping from a building. The whole thing may have been some sort of hallucination–the hospital she was in claims that it’s not even possible to get out on the balcony from inside the rooms–but it’s enough to fill Gwen with a new religious fervor. She storms the island with a group of protesters and is killed, clearly a planned accident by Rick. As a direct result Thomas is fired, and Chris makes his escape from the island.

Thus we arrive at the punk rock part of the story. Chris joins a punk band (The Flak Jackets) as lead singer, and begins to preach his messages: anti-religion, anti-mass entertainment. As he says in a TV interview: “I don’t care whose DNA I come from. The way I see it, I’m the bastard child of America’s runaway entertainment complex.”

Dark as the story has been so far, it will soon become darker yet.

Chris and The Flak Jackets quickly begin attracting a lot of attention. Thomas is concerned about Chris’s safety–he promised Gwen to look after him–and reluctantly agrees to take charge of security for the band. His greatest challenge comes when they choose to give a concert in Jerusalem. He helps turn back a terrorist attack before the concert even begins, but at the cost of the serious injury of a band member. After she dies Chris makes another TV appearance to reveal the existence of his twin sister, along with Dr. Epstein, who reveals the truth about the cloning. This time a group of Christian fundamentalists succeeds in bringing down Chris’s helicopter, ending his life. 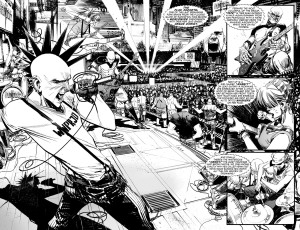 Chris performing with the Flak Jackets

The latter part of the story is interspersed with scenes of Thomas learning the truth about his IRA connections. His father had turned on the group, and was killed before he could escape with the family. So Thomas’s indoctrination was based on a lie, and all of his violent acts were ultimately baseless. In Jerusalem he confronts Chris: “My whole life I’ve tried to do what God has asked, but all I’ve ever been is a fucking murderer! Is there any way I won’t end up in Hell?! Seems like I never had a chance!” In the end Thomas takes his violent revenge on Slate, believing there can be no other path to justice.

The series had an unusual format, at least for Vertigo. Presented in black and white, the  issues had 32 pages of story (versus the usual 22 pages), so the six-issue run was equivalent to almost nine issues in page count. Plus the TPB had an additional 10 pages, but I couldn’t tell you where they were added because I only read the collection. I would call the story densely packed, but I enjoyed the information density, and didn’t feel it was rushed.

I don’t know about the number of issues planned, but I remember something about Murphy being surprised that it was coming out in B&W instead of color. If that’s true, it sounds like there were some late adjustments made. I was having a lot of trouble figuring out where the issue breaks were in the trade, so I finally just found reasonable stopping points and stopped worrying about it. It read continuously, similar to the way the collections of The Walking Dead look. Although those issues generally end in a climactic splash page, so it’s easier to figure out.

In his closing essay Sean Murphy says that the IRA character was part of the script from the beginning. Murphy ended up doing research into the history of The Cause, which caused him to question the motivation behind IRA convictions, as well as his own Catholicism. He doesn’t say if there were IRA sympathizers in his family, so it is safest to assume that he used the IRA as an example of extreme religious fervor in action (and one that had at least some resonance with his own background). Thomas is larger than life in every way, and embodies the extremes of religious fanaticism: self-righteousness, followed by total guilt and self-hatred over his actions. He isn’t intended to be realistic, but ultimately all of the characters are extreme in their own ways.

Punk Rock Jesus is an epic tale. Although at times it threatens to fold under the weight of its melodrama, it always manages to find enough moments of true character to soar. I’ve long admired Murphy’s drawing, but I must say that there is one stylistic quirk that started to nag at me. It’s the way he draws noses. I can adjust to their tendency to look sharp–that’s an exaggeration that can happen in cartooning–but the dark crosshatching he uses makes everyone look like they’re drunk or have a cold. That got distracting after awhile.

Freelance Journalist & Musician; Senior Contributor, All About Jazz.com; writing on comics at mrvertigocomics.com & No Flying, No Tights.com
View all posts by marksullivan5 →
This entry was posted in miniseries, Vertigo comics and tagged Sean Murphy. Bookmark the permalink.