Posted on September 2, 2013 by marksullivan5 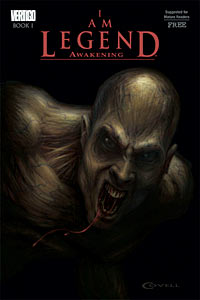 I began my reading of the 2007 Vertigo minis with a one-shot. I Am Legend: Awakening was a free prequel to the Will Smith movie. Apparently it was only distributed at comics conventions: mine came from the San Diego Comicon. So I missed it at the time, and found a $10 copy on ebay recently. Richard Matheson’s 1954 novel was arguably the beginning of the current zombie craze, as well as an early use of the concept of an apocalypse due to disease. These stories all take place as the plague is just beginning to spread. The most substantial (and the most conventional in storytelling style) is the first: “Losing Voice: Ethan’s Story” by Steve Niles and Bill Sienkiewicz. It shows the horror of a family caught up in the outbreak in their car, as only one son escapes. Project coordinator Dawn Thomas contributes two stories, both illustrated by Jason Chan in a painterly, photo-realistic style that I suspect is heavily digitized. “Death as a Gift” depicts the last survivor in Hong Kong as she makes a choice: the dialog takes place via a note she is writing. “Sacrificing the Few For the Many” is a short impressionistic story set in Central America, with no dialog at all. The remaining stories were both illustrated by David Levy in a similarly realistic style, although they look more like they were done by hand. “Isolation” by Mark Protosevich tells the story of a high-profile prison inmate who emerges from isolation to find a changed world. “Fighting Change” by Richard Christian Matheson (son of the author of the original novel) may be the most haunting. It features a police detective who apparently feeds on the energy at recent murder scenes, by laying down in the outline left by the corpse. There was certainly lots of story potential in this anthology concept. A Book II was announced–featuring a story by Orson Scott Card–but it never materialized. As of this writing four stories are still available online (including Card’s story “Shelter”) in motion comics versions here.

The Vertigo miniseries Sandman Mystery Theatre: Sleep of Reason (written by old favorite John Ney Rieber, illustrated by Eric Nguyen) revisits Wesley Dodds, the Sandman with the gas mask and the sleep gas gun. Matt Wagner & Guy Davis’s ongoing series was one of the original Vertigo series, and one I remember especially fondly. This new story doesn’t ask the reader to remember details from the original run, but it probably would be difficult to relate to those characters without any prior history.  The story opens with Wesley and longtime companion Dian Belmont visiting Afghanistan in 1997, then cuts to ten years later with photojournalist Kieran Marshall (who seems to be fated to take up the Sandman mantle) covering war in Afghanistan. Wes and Dian have been aging in real time since his adventures as the Sandman in the 1930s, so they’re now elderly, but Wes has lost none of his hero’s heart (the same goes for Dian, even though she is battling a terminal cancer). He is forced to spring back into action with the sleep gas when Dian is kidnapped. Kieran finds himself drawn into battle in the course of trying to get an exclusive with legendary terrorist leader Masad. His dreams drive him to don the gas mask and pursue the terrorist, despite his earlier cynical stance. Wes and Dian’s part of the story recurs throughout the miniseries. At first it seems to have no connection with Marshall’s adventures in 2007, until it is revealed that Masad was Dian’s kidnapper. So he has faced a Sandman before, and experienced the sleep gas. Dreams are a recurring image in the story, given much greater emphasis than in the original series. There are warrior dreams that mirror the conflicts in the real world, a narrative device that is more like Neil Gaiman’s Sandman stories than the Golden Age character. In fact they can be confusing, especially on first reading, as it’s not always clear when the dream sequences begin and end. Ultimately it is Wes and Dian’s story that is the most relatable: the miniseries never quite ties together the two Sandmans and the dreams. The series was collected by Vertigo, and is still in print.

Faker was a six-issue miniseries, written by Mike Carey, with art by Jock. It’s set at a Midwestern university, and focuses on a group of housemates. They are a varied lot, but they share one thing in common: to the extent that they’re not ciphers, they’re downright unlikable. The story opens with Jessie Kidby engineering a sexual blackmail plot on one of her professors, which it turns out she’s done several times before. Marky Sale is a bisexual sex addict, who callously uses and discards partners. The remaining housemates are the requisite jock (Paul Saknussen) and nerd computer hacker (Yvonne Latimer). After a particularly wild party they all wake up with holes in their memories. Then their roommate Nick Philo shows up, but there’s a problem: no one outside this circle of friends has any recollection that he even exists.  All of this happens in the first two issues, which leaves a lot of space for solving the mystery. A bit too much, I’d say: once fringe science and black ops are revealed, the story could have wrapped up pretty quickly. The group finds themselves imprisoned in an experimental facility and must engineer an escape, which ends in a helicopter chase and contamination of the town water supply with the experimental drug. There’s a final twist as Jessie decides she prefers the simulated reality to her real one. It’s a concept that had a lot of potential, but the mystery quickly resolves itself with the “magic” science explanation. Instead of an investigation into the power of memory and fantasy, Carey (mostly) gives us an action movie. Jock’s artwork is striking: the pages are full of bold shapes and colors, with minimal backgrounds. But his facial expressions tend toward cliche, and everyone’s hair looks kind of solid and geometric (more like a helmet than real hair). Overall it’s not a bad story, but disappointing given Carey’s usual high standards (there is a TPB collection).