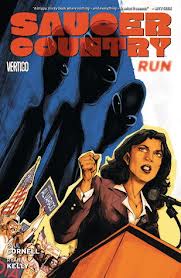 Saucer Country Vol. 1: Run collects the first six issues of the Vertigo series created by writer Paul Cornell and artist Ryan Kelly (plus an additional short story). I wasn’t expecting the series to be cancelled by the time I started the first collection, but I’ve still been looking forward to it. It begins with what looks like an alien abduction of New Mexican Governor Arcadia Alvarado and her estranged husband. She tells her staff about it as she announces her candidacy for the Presidency. The campaign promptly hires a disgraced Harvard UFO-ologist, who might not be completely sane. He sees and hears a small ghostly couple from the illustration on the plaque attached to the Pioneer 10 space probe: it’s a measure of the strangeness of the story that we honestly don’t know if they are real or imaginary. As he talks about the alien abduction phenomena, he observes that New Mexico is haunted by this myth: “we’re in Saucer Country now.” The story is populated by many characters who sincerely believe that alien abduction is real, and an invasion is underway. Some of them are presented as cranks–there’s a classic conspiracy theory talk radio host–but many of them appear to be quite normal. There’s even a group of scientists and engineers. So it’s a bit like the X-Files, but so far there has been no sign of a government cover-up. The first collection ends with the standalone Issue 6 (“A Field Guide to Flying Saucers”) and a short story from Strange Adventures 1. Both of them are historical guides to true UFO history, some of which had already been alluded to in the story. It’s also an effective way to use guest artists–Jimmy Braxton for #6, Goran Sudžuka for the short story–because their styles don’t need to blend perfectly with the series artist.

Glyn Dillon’s The Nao of Brown really feels like a graphic novel: it’s 200 pages long. It’s about a young woman named Nao Brown whose OCD symptoms involve (imaginary) violent morbid acts. She’s constantly having fantasies about killing or maiming people she comes in contact with, which gives Dillon a lot of unusual imaginative imagery to work with. Dillon has been out of comics for several years, but his name should ring a bell with longtime Vertigo readers. His credits include pencils and inks on Shade, the Changing Man; Peter Milligan’s miniseries Egypt; and an issue of Sandman. Nao is aware that she is a “mental case” (as she puts it). She’s constantly reminding herself that she is a good person, despite the lurid fantasies (which she rates on a scale of 1 to 10). As the story opens she has flown back to England from Japan, escaping a failed love affair and an illustration career that has not gotten off the ground. She takes a part time job at a friend’s toy shop, and visits a Buddhist center to try to quiet her overactive mind. There she begins drawing Enso, the Zen circle symbol (circles are a recurring visual theme, which also includes iPod jog wheels and washing machines). And she engineers a meeting with a washing machine repairman she finds attractive, which seems like a positive step. He even shares her interest in Buddhism, but the relationship is rocky. Nao has a breakdown that brings the story to a crisis. Here Dillon takes a narrative shortcut: Nao’s boyfriend Gregory has a stroke, and Nao is hit by a car while leaving the hospital.  The story jumps to four years later.  Everyone has recovered, and we get a quick glimpse of their new lives. Gregory has written a book (with a cover illustration by Nao), and Nao has apparently married her friend Steve and is happily raising their child. The book ends with a picture of her son, in a post that recalls Nao’s childhood photo that opens the book: another symbolic circle. The narrative is interspersed with a fairy tale about the Nothing and a boy named Pictor, whose search for happiness parallels Nao’s, although the two stories never quite meshed for me. Dillon has created an ambitious tale, which while flawed is still visually arresting and emotionally involving.

The Manhattan Projects Vol. 1: Science. Bad. by Jonathan Hickman (writer) & Nick Pitarra (artist) is an alternate history story, in which the invention of the atomic bomb is only the most visible project being worked on by an even larger and more famous team of scientists than the historic Manhattan Project. It’s really a front for a lot of mad (and bad) science. Reminds me of Planetary an awful lot, but it’s full of original ideas. The cast includes such notables as scientists Joseph Oppenheimer, Richard Feynman, Albert Einstein, Enrico Fermi, and Wernher von Braun. They’re all portrayed as brilliant, and they each have very distinct personalities, but to a man they’re psychologically damaged. Socially inept, sociopathic, narcissistic, suffering from multiple personality disorder…they’re not a healthy group.  In the first five issues collected here the project discovers a gate to alternate realities, greets emissaries from several alien races (and makes enemies), and creates the atomic bomb (which was supposed to be their mission, after all). I like all the surprise plot twists. You can never even be sure of the true identity of any of the characters! Two of the major ones are revealed to be someone other than they pretend to be. It’s a bit like the “anyone could die at any time” aspect of The Walking Dead. Dizzying as the story can be in this installment, the possibilities seem almost limitless.