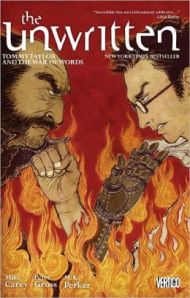 The Unwritten Vol. 6: Tommy Taylor and the War of Words collects Tommy’s war against the cabal, as well as the cabal’s secret history (told in the .5 issues that alternate with the main story). The war has all of the magical action one would expect, but the history issues are especially varied. They feature a remarkable array of guest artists, including Dean Ormston, Vince Locke, Michael WM. Kaluta, Gary Erskine, Gabriel Hernandez Walta, Rick Geary, and Bryan Talbot. Several of them are longtime Vertigo creators, and the rest have a history of respected independent work. The history extends from Beijing in 221 BC to the present, covering a wide variety of historical events. That kind of sweep, and the variety of the artwork, is the kind of event Vertigo ongoings are made for. It’s nice to see that there is still a place for such ambitious storytelling. Towards the end of the war issues the history begins to bleed into the current narrative, as Tom makes his way into the heart of the cabal, and the identity of the mysterious assassin Pullman is finally revealed. The final .5 issue is an epilogue. We see the climactic attack on the cabal from the perspective of a member of the Grid, the collective used to control stories, and thus the history of the world. So much ground is covered in this sequence that it could have served as the series finale. It will be fascinating to see where the story goes after such major changes in the status quo. 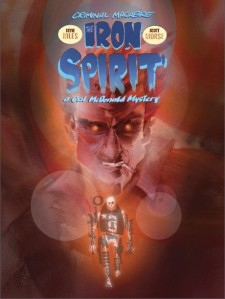 Criminal Macabre: The Iron Spirit is an OGN written by Steve Niles and illustrated by Scott Morse. It takes place after private eye Cal McDonald has become one of the undead. He’s still adjusting to his new state (longtime readers should be pleased to hear him relate that “I was just as pissed as ever”), but he agrees to help a retired Air Force captain deal with a haunting that resulted from a secret weapons development experiment gone wrong. The format is unusual. It’s more like an illustrated novella than a comic: the text is presented in a typewriter font (as if it came from Cal’s case files), accompanied by Morse’s pencil and watercolor illustrations. And the physical book is like an oversized children’s board book, printed on glossy cardboard stock. 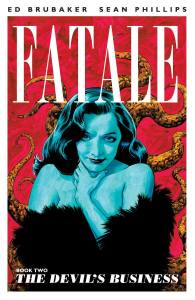 With Fatale Book Two: The Devil’s Business, Ed Brubaker and Sean Phillips are still in top form. This arc follows Nicolas’s investigations in the present, and introduces a couple of actors who become involved with the cult in Hollywood in the 1970s. Naturally the man becomes romantically involved with our ageless femme fatale Josephine. She’s irresistible when she wants to be: it’s her curse. In fact she mentions the fact that her gardener became obsessed with her just by seeing her naked at a distance. In the course of escaping from the cult’s clutches we see just how powerful she can be when she uses that power intentionally, as she compels a cult member to set himself on fire and attack Hansel, the cult’s charismatic leader who everyone addresses as “Master.” And that’s not the only “fatale” effect, either. There’s a reason why Josephine had been trying to live like a recluse. By the time she has left her mansion behind and gone on the run, every man in the vicinity she had a close relationship with is dead. There will clearly be much more to her story, and we’ve already seen Hansel come back from the dead, so it seems certain we haven’t seen the last of the cult, either. As this collection closes, Nicolas is in jail, and has just been given a copy of The Losing Side of Eternity by Dominic Raines (the 1950s manuscript found at the beginning of the series, which Nicholas had thought was unpublished).