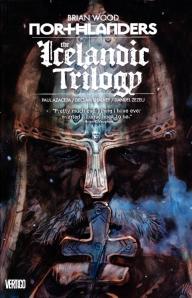 The final Northlanders collection, Northlanders Book 7: The Icelandic Trilogy tells the story of the Norse settlement of Iceland. Each of the three-issue arcs was illustrated by a different artist: Paul Azaceta is the first. It covers 871 – 886, the period of the first emigration from Norway. It’s a hard life, and Val Hauker toughens up his son Val Hauksson to cope with it. Perhaps too much: Val kills his mother, and eventually sends his father into the wilderness. The second arc  jumps to the fifth generation in 999-1000, as society adapts to the introduction of Christianity. This one was illustrated by Declan Shalvey, whose work I haven’t seen before. It suits this series well. The third arc is set in 1260, with a tenth generation Hauksson and his eleventh generation son. There are rumblings of a takeover by the king of Norway, and son Oskar pushes his father aside so he can wage war on the other clans. This turns out to be a horrible decision, and it ends with the near-annihilation of the clan, making the entire trilogy the story of the rise and fall of the Hauksson family. The ever reliable Danijel Žeželj returns to illustrate this arc, a splendid choice to end the series.  I note that DC’s cover blurb describes the series as “the modern classic,” which is a pretty ironic thing to say about a series they cancelled rather abruptly.

Fables: Werewolves of the Heartland is set during the period that Mister Dark had taken Fabletown, so Bigby Wolf is scouting for a new Fabletown location. Definitely not as free-standing as the previous OGN Fables: 1001 Nights of Snowfall (which was a prequel), although the current condition of Fabletown is just background to this story. There are frequent flashbacks to Bigby’s experiences during WWII, which was the genesis of the heartland werewolf community.  Bigby was operating as a freelance spy/terrorist against the Nazis, and was recruited by an American secret service operative. When he is captured by the Nazis, it turns out they lured him there specifically for a secret project: to use his blood to create an unstoppable werewolf regiment. That plan does not pan out, but in the process his war buddy Arthur Harp and the Nazi scientist in charge of the project both become infected. The science here probably does not bear close examination. It’s the only instance I can think of where a Fable affects Mundys directly, so best to just accept it and move on. The infected couple finally pair up and make their way to the United States, where they found a werewolf colony in a town in Iowa called Story City. This is the community that Bigby encounters, initially with no idea that there is a personal connection.

The present day story revolves around a power struggle for control of the town, with both sides attempting to use Bigby as a pawn (or kill him). Unfortunately that story is far less interesting than the wartime exploits. The artwork becomes a significant weakness towards the end: there are pages so sketchy that they look half-finished. I can’t imagine how there could have been a rush, as the book was in the pipeline for years. I have scanned a sketch of Bigby from my sketchbook that Craig Hamilton drew during HeroesCon 2011, and he said he had been working on it for months already. The story was a bit inconsequential, too: the sort of thing that would have made a good standalone issue for the monthly series. A disappointing entry that is not up to the high standards of the Fables series. 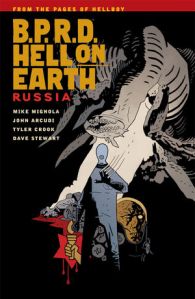 Getting back to B.P.R.D. with B.P.R.D. Hell on Earth: Russia (Vol. 3 of the new series). Tyler Crook is now the full-time artist, after taking over for the second arc in the previous collection. The big cliffhanger was Abe Sapien’s injury, which initially is only mentioned briefly (but things don’t look good). Kate Corrigan and Johann Kraus have gone to Russia to look into an outbreak of walking dead and some kind of possession, both of them the apparent result of a contagion. There’s some great fight scenes, an interesting Russian paranormal B.P.R.D. counterpart is introduced (Iosif, Director of the service and a resurrected dead man in a containment suit much like Johann’s), and some changes to the B.P.R.D. itself. Johann acquires an improved containment suit, and Abe seems to be transforming rather than dying. Andrew Devon appears briefly, still following the charismatic young woman from the previous collection. Finally, Iosif reveals a surprise guest at the very end, a character who has not been seen for awhile. The collection also includes the short story “B.P.R.D.: An Unmarked Grave,” a lovely little piece about the death of Hellboy from Dark Horse Presents #8 (illustrated by the incomparable Duncan Fegredo). The Sketchbook section reveals that some of the initial character designs were created by Guy Davis before Tyler Crook came on board, so in a sense we still haven’t seen Crook flying solo.