I’m a big fan of Criminal, so this is another series I’ve been anxiously awaiting in collected form. It’s a unique blend of noir and horror, which I found a bit hard to adjust to at first. I assume the lengthy Prologue sets up important long-term story elements. But it’s set in the present, and the story immediately flashes back to 1956, where it stays for most of this five-issue story arc. It took a couple of issues reading for me to fully adjust: I kept confusing present day characters with ones in the flashback. Then you’ve got to accept that the supernatural elements are real, which is not something you expect in a noir setting. The story revolves around a demonic cult, complete with red hoods and ritual sacrifice. Two police detectives and a reporter get caught up in the cult’s activities, with a mysterious, alluring woman tying them all together. The apparently ageless Josephine is certainly an interesting character. I’m looking forward to finding out more about her.

Heading towards the series conclusion with the penultimate collection. There was a major cliffhanger at the end of the previous volume, so it was an odd time for an interlude from the main story. But the first three issues collect “The Taxidermist,” a historical tale set in Alaska which was illustrated by guest artist Matt Kindt (in his notes to his recent graphic novel The Underwater Welder Lemire thanked Kindt for helping him to get the time in his schedule to complete that story). Kindt’s style complements Lemire’s nicely, and the story ends up being much more relevant than it first appeared. The title arc centers around the discovery that Walter is not what he seems. Jepperd (with Gus and Dr. Singh) have gone to find Haggarty’s camp. They and the group at the dam uncover the truth independently, which leads to a showdown with Walter and a race to get back to the dam to help. In the end the group proves themselves to be capable of helping themselves without Jepperd’s help; Singh is gone, after attempting to kidnap Gus and head to Alaska with him; and Lucy has fallen to the plague. 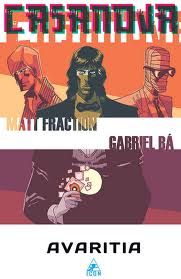 This collection completes the grand story arc begun when the series launched at Image back in 2006. Avaritia centers around Casanova Quinn’s attempt to stop the rise of the criminal W.A.S.T.E. empire by killing founder Newman Xeno in all of the parallel universes. By the end Casanova is himself being hunted and eliminated, due to an incredibly twisted series of circumstances which end with the character Seychelle resuming the evil persona he had back in the first series. Man, this comic is crazy. I have to assume that Matt Fraction’s mainstream Marvel writing isn’t much like this: this is where he gets to just let his imagination off the leash. Gabriel Bá seems to be having a blast as well. He was the artist on the original series, and looked so at home here that I completely forgot that his brother Fábio Moon had illustrated the second series (Gula), until the “Overtime” afterward reminded me. All of the creators have been busy with other (frequently higher-profile) work, but the story reads as if all three series had been published within months of each other, instead of years. Fraction makes at least one ironic self-referential comment about that: “That was a life-time, two miniseries and a whole other publisher ago, Seychelle.” Fraction plans an extended series of Casanova stories beyond this first big arc. I certainly hope he and the rest of the team can find the time to get them out a bit more regularly!

So we come to the big series conclusion at last, but Aaron doesn’t slow down the pace at all. He’s got a bunch of unresolved plot hurtling towards a final crisis until nearly the end. Dash ended the previous collection by revealing himself as an FBI agent and arresting Chief Red Crow, and the story picks up right from there. Red Crow goes to prison, Dash finds happiness on the Rez with activist Maggie Standing Rock, and it looks like we could be headed towards a happy ending. This is Scalped, so of course we don’t get that! Red Crow gets out of prison, Dash’s crimes catch up to him, and Catcher reappears, leading up to a big showdown at the casino. Aaron did a good job tying up the loose ends, although he left a few new ones. Dash doesn’t get his happy ending, but I think there’s some potential for happiness later, even if Dash doesn’t see it himself. My only criticism is the frequent use of dark fight scenes. Sometimes it seems as if the action all takes place in the woods at night or in darkened rooms! I found myself reading them multiple times trying to figure out exactly what was going on–a recurring problem in the series–and that really interrupts the story telling. The final collection includes bonuses for longtime fans: an Afterword by Jason Aaron, and an R. M. Guéra Sketchbook with character sketches and story layouts.