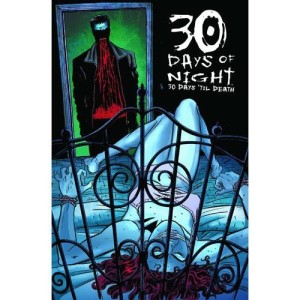 30 Days of Night: 30 Days ’til Death by David Lapham was a four-issue miniseries that came out in 2009 (at the same time he was doing his Vertigo series Young Liars). I completely missed this at the time, which is why I wanted to mention it. When I ran across the collection I couldn’t believe Lapham had played in Steve Niles’ sandbox. It’s a story about an American vampire trying to blend into normal society, in order to avoid being assassinated by a European death squad. It has the urban underbelly feel of much of Stray Bullets, so it suits Lapham’s style surprisingly well. I would highly recommend it to Lapham fans. He tells his own kind of story, in his own style. You don’t have to know much about 30 Days of Night to get into it. It’s amazing to consider that the original miniseries was only three issues! From tiny acorns… The collection includes Lapham’s covers as well as Ben Templesmith’s alternate covers, plus some sketches.

This collection gathers together two World War II storylines. The first is the “Ghost War” arc from the regular series. It centers around Pearl Jones and her mortal husband Henry Preston. Skinner Sweet knows about Henry’s deal with the vampire-hunting organization the Vassals of the Morning Star: he has revealed the weakness of the American vampire, in exchange for protection for him and Pearl. When Henry comes along on a mission to the island of Taipan–home to a nest of vampires–Skinner also makes the trip. But Skinner’s vengeance is interrupted by contact with the vampires, who turn out to be a feral, heretofore unknown breed. When it becomes clear that the Japanese military intends to use the vampires as a weapon, Skinner and the vampire assassination squad make common cause against them. Then Pearl arrives, killing Skinner (or so it appears), and saving Henry and Calvin, the other surviving member of the squad. As the story ends, we see that Calvin has been the unexpected recipient of Pearl’s blood.

The miniseries Survival of the Fittest moves to the European theater, and features Felicia Book and Cash McCogan. Having survived vampire attacks earlier in the series, they are now both agents of the Vassals of the Morning Star. They travel to Romania to retrieve a reputed cure for vampirism. There they encounter Nazis with their own vampire military force, this time Carpathian vampires. Scientist Dr. Pavel has created a light-emitting anti-vampire weapon, but his real secret weapon is an ancient race of giant vampires. In the end he passes along a formula that may actually cure vampirism. Felicia is shown using it on herself and Cash’s vampire son at story’s end, to some apparent effect. This is a tightly written series, ably illustrated by guest artist Sean Murphy, who is rapidly becoming a favorite of mine. It is an effective way to present a parallel story without overly complicating the main storyline.

It’s a whole new phase in the story as the group makes their way to Alaska. But on the way there’s already a new complication, and a new character. There are signs that he may not be as he appears. Like many of the survivors in this story, he seems to be hiding dark secrets. I enjoyed the issue that had guest artists Nate Powell, Emi Lenox, and Matt Kindt illustrating different flashback sequences. There’s also an entire issue printed sideways, continuing the tradition of experimentation that has been a welcome feature of the series. And there are two characters that return unexpectedly, literally on the last page. Jeppard will be happy to see one of them…the other one, not so much.

An angel falls to earth and lands deep in a forest populated by magical folk: faeries, pixies, and fauns. They conduct a tribunal to decide what to do with him, each of them telling a different story intended to reveal the nature of the angel before them. The end result is a  beautiful example of old-school Vertigo fantasy. It is nice to see that it can still be done well, with no irony. It’s an unusual project in that it was “conceived and illustrated” by Guay, then she got five writers to write it. The exact opposite of the usual writer-driven model for creator-owned comics (and most superheroes, too, at least nowadays). After a second reading, I’ve decided that it’s basically an anthology of stories about angels, even though it does have a framing story that provides something of a through-line (with a shocking surprise conclusion). Guay changes her style for every story, but it fits them all perfectly. It really is gorgeous to look at.