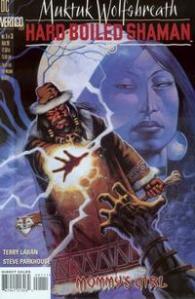 In the 1998 3-issue miniseries Muktuk Wolfsbreath: Hard Boiled Shaman writer/creator Terry LaBan turned over the artistic duties to Steve Parkhouse. The character already had a history, first appearing in LaBan’s Fantagraphics series Cud in 1992. I note with amazement that LaBan has only recently finished his Muktuk Wolfsbreath Webcomic. The title means exactly what it says: Muktuk is a Siberian shaman whose internal narrative reads like a noir detective. And the central story here is a murder mystery, but one involving ghosts and demons. Add talking animals, spirit guides, and other layers of reality into the mix, and you’ve got a very unusual piece of detective fiction. At first I found it difficult to accept all of these elements–and LaBan sometimes overwrites dialog–but in the end the action and the mystery take over. It’s a very enjoyable 3-issue ride.

The star of the four-issue miniseries Jonny Double also had a history, being based on the character created in 1968 by Len Wein and Marv Wolfman. Vertigo did not make much of that DC history at the time, and the series is notable mainly as the debut collaboration between writer Brian Azzarello and artist Eduardo Risso, which subsequently led to the long-running series 100 Bullets. This is of course much more compact, as well as a more conventional noir detective story. Jonny is an ex-cop working as a struggling private investigator in San Francisco. While the original was a former beatnik, this version sometimes talks like a former hippie. He takes a job watching a rich man’s daughter named Faith. The story is that she has left home, and her father wants to make sure she hasn’t fallen in with a bad crowd. But of course things are never that simple. Double gets romantically involved with Faith, and she convinces him to help her and her friends clean out a bank account they think belonged to Al Capone. Unfortunately there’s a living gangster involved, who starts killing off the group one by one. In the end there’s the inevitable double-cross, and several of the players turn out to not be who they pretended to be. Azzarello’s dialog sometimes tries too hard to be “street,” and the ending is rushed. But it’s a good read despite those flaws, and can certainly be recommended to 100 Bullets fans. It has been collected, but the paperback is out of print.

Tattered Banners was a four-issue miniseries by Alan Grant and Keith Giffen (writers) with Mick McMahon (artist), surely one of the most unlikely creative teams ever to work on a Vertigo project. The story follows social worker Curtis Banner as he copes with a world where reality is shifting. One minute he’s talking to a welfare client, then she suddenly develops a gullet. Cars on the street flow right through him, hours become 58 minutes long, everyone stops pronouncing the letter ‘O:’ it’s one weird thing after another. At first Banner seems to be the only one who hasn’t changed, but then he starts to meet others. So for most of the series our hero is on the run, an abnormal outcast in this changed world. McMahon gets to draw lots of surreal things in his distinctive cartoony style (the only other Vertigo artist I would compare him to is Marc Hempel). And the series moves along from one crisis to another: there’s plenty of energy. The only problem is it has one of the great non-endings. Basically the tale just stops, with no resolution at all. What will become of Curtis? Is the world really, permanently changed? Your guess is as good as mine. There’s a recurring problem with Vertigo miniseries not being able to stick the landing, and this is a glaring example. It’s as if Grant and Giffen had no idea how the story was going to end when they started, and never figured it out. 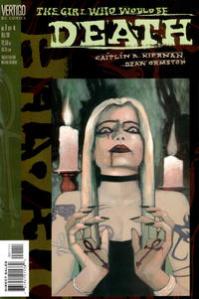 The Girl Who Would Be Death by by Caitlin R. Kiernan & Dean Ormston is an odd sort-of Sandman spinoff, which also uses a couple of minor characters from The Dreaming. Originally intended to be a miniseries about a cult that worships Death of the Endless, it wound up being not quite that. That cult does figure in the story, but the main focus is on a young woman named Plath. She is obsessed with bringing her lover back from the dead, and she acquires the Magdalene Grimoire (the book that occultist Roderick Burgess used to trap Dream of the Endless by mistake) to that end. In the process she steals one of Death’s own sigils, an ankh, and in some way becomes Death. After a great deal of purple prose–and an attempt to retrieve the ankh by a messenger from the Endless–Plath attempts a resurrection ritual, which seals her fate, along with the cult leader. Ormston makes everything look surreal and portentous: it’s hard to imagine the story working with most other artists. In the end it’s like much of The Dreaming, a spinoff with little point to it. It’s hard to care what happens to these characters, even with the Sandman connection.