I’ve been writing reviews of current graphic novels/collections on the Captain Comics website for a few years under the title “Mr. Vertigo Reviews Again” (you can find the older ones there in the General Comics Discussions area). So I’m going to continue that practice here. I’ve been away from this for a few months, so some of these are more current than others. 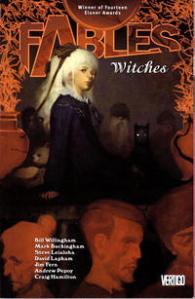 This collection opens with “Boxing Days,” a one-shot describing how Mr. Dark was captured by the Empire. There are lots more flashback stories that could be told like this. Nice to see artist Craig Hamilton back, he did a great job on the “The Last Castle” Special back in 2003. The title arc covers a lot of ground, showing more about the role of the witches in Fabletown, Geppetto’s return and the power grab everyone probably secretly suspected would happen eventually, and of course Bufkin the flying monkey’s valiant defense of the disembodied Fabletown Business Office. The Great Fables Crossover battle against the Literals is mentioned only briefly. Like everyone else who was not actually present at the climax, no one in Fabletown remembers it. Frustrating to arrive at a major plot point–the arrival of the Blue Fairy–only to take two issues for a diversion in Flycatcher’s kingdom. It’s a fun story, though, taking off from “Casey At The Bat” to explore serious questions about just rule. Also Fly’s relationship to the late Boy Blue, and to Riding Hood. Willingham often makes pacing decisions like this, something he can get away with in a series so successful that he can count on taking as much time as he wants to tell a story. Sometimes the side stories turn out to be significant: in this volume the opening “Boxing Days” issue winds up having more relevance to the current storyline than was apparent at first. 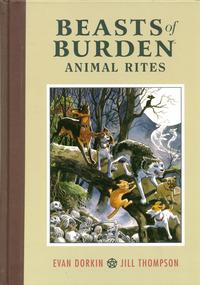 Dorkin and Thompson began this horror series starring talking animals in 2003, with no thought of doing more than one short story. The first part collects all four of the stories from The Dark Horse Book of… anthologies. I read the first one, “Stray” in a Free Comic Book Day collection a few years back, and it’s still one of the best. For the later four-issue series they had considerably more space to work with. The individual issues were still fairly free standing–a new crisis introduced and (mostly) resolved in each one–but they did make use of series history. The reintroduction of Dymphna the witch cat was a nice touch, and she went on to play an important role. While the big resurrected bad guy was defeated in the final issue, it also set the scene for an ongoing battle. Which reminds me of the way BPRD’s series of miniseries have been structured.The concept of a horror story with talking animals may be hard to imagine if you haven’t read it. But the animals are written and illustrated with very distinct personalities (more than some humans in comics!) and the horror feels real. This hardcover collection also includes an Afterward by Evan Dorkin about the genesis of the series, and a Sketchbook with notes by Jill Thompson. 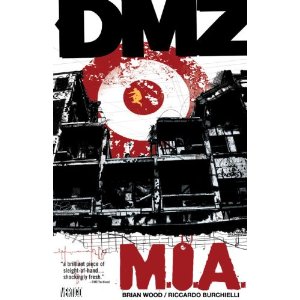 When we left Matty Roth, he had just made a horrible mistake. Imprecise orders had resulted in a civilian massacre by his private militia: he found himself immediately persona non grata, all of his work in the DMZ undone. And then he looked into the distance and saw a mushroom cloud… But the first issue in this collection prolongs the suspense, because it is issue #50, a celebration issue featuring a star-studded group of guest artists. Titled “Notes From the Underground,” the concept is Matty looking over his notes, trying to make sense of his time in the DMZ. Nothing much happens, but the series of short stories and pinups summarize many of the major players in the story so far. Great variety of artists (Rebekah Isaacs, Jim Lee, Fabio Moon, Ryan Kelly, Lee Bermejo, Riccardo Murchielli, Phillip Bond, John Paul Leon, Eduardo Risso, and Dave Gibbons). Many have been associated with the book, but some are wild cards, and they all get to do something unusual. The four part title arc shows Matty coping with his new status, riddled with guilt and trying to survive in a desolate part of town, all alone. The detonation of Parco Delgado’s nuclear device has left him on the run, his government in shambles. Matty’s mistake has been largely lost in the confusion: people are looking for him because they think he knows Parco’s location (which he doesn’t). His decision to turn himself in at the nearest border checkpoint becomes an odyssey through the city, ironically featuring more action than the average DMZ arc. And when he gets there, he gets the surprise of his life. Instead of being arrested or killed, he is treated as an honored guest and offered amnesty, in exchange for returning to the DMZ and continuing to report on the situation for Liberty News and the U.S. government. He rejects the amnesty offer, but takes the job. So the arc ends with his return to the city with a fresh start, a second chance to get it right. 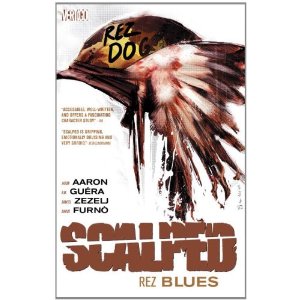 The previous collection was a breathless dash, resolving several long standing plot lines, and ending with a major new complication. Here the pace shifts, as the first four issues are character studies with no direct relationship to the preceding events. “Listening to the Earth Turn” looks at an old couple living on the outskirts of the reservation. It’s a lovely character study (with a surprising finale) beautifully illustrated by the ever reliable Zezelj. I have never been disappointed by a comic he drew. “A Fine Action of an Honorable and Catholic Spaniard” is a two-parter featuring Chief Red Crow’s enforcer Shunka. Sent on an errand to a Michigan reservation, Shunka becomes personally involved. We learn a big secret about him, and he finds himself used in an unexpected way. Regular artist Guéra returns for “Family Tradition,” a story about Dash’s father Wade. It tells the story of his tour of duty in Vietnam, and how he became involved as an FBI informant. The big arc is “Unwanted,” which returns to the issue of Carol’s pregnancy that was the big reveal at the end of the previous collection. It contrasts the history of her birth with her struggles about keeping the baby, and finds Wade returning to the reservation after a long absence. Dash and Carol both struggle to overcome their addictions, and when they meet Aaron again shows us a conversation in which neither of them says what they are thinking. Theirs is looking like a doomed relationship. In the end Carol makes her own decision without Dash, but there is plenty left unresolved for both of them. Wade has asked Dash to help him solve the mystery of Gina’s murder, but is just beginning to understand the depth of Dash’s involvement in Rez affairs. 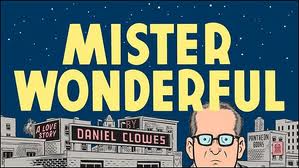 The bulk of this material first appeared in The New York Times Magazine in 2007-2008 (still available online here). Described as “a midlife romance” on the back cover, it is basically the story of a blind date and the misadventures that ensue. Of course the title is ironic, as cartoonist Marshall is constantly fantasizing about doing some combination of suave, romantic, and heroic things. In reality he finds himself getting into two fights involving his date Natalie: first with a purse snatcher, then with Natalie’s ex. Convinced that he’s blown his chances with her, he returns home to find an email inviting him to breakfast. The story has a happy ending, closing on the couple awkwardly getting to know one another. Despite the neurotic tone it’s a charming story, and a quick read. In modifying and expanding the story into book form Clowes actually made it a less conventional comic than it was originally. Each of the original twenty chapters was a single sheet, a traditional sixteen panel grid (which also resembles a Sunday color comic strip). Clowes reformatted the pages into a rectangle containing half the panels of the original pages, and inserted transitional pages, all of them large single panels or double splash pages. So the story is substantially the same, but with a slightly different, more dramatic rhythm. 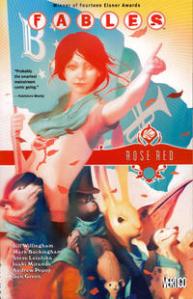 When we last saw Rose Red, she had fallen into a deep depression and hadn’t been out of bed in days. Meanwhile all of Fabletown has descended on the Farm after Mister Dark’s attack. In an attempt to cheer Rose up, her mother appears to her and tells her the full story of her childhood with her sister Snow White. The end of the five-issue arc finds her restored and back in charge of the Farm. And Frau Totenkinder returns, restored to her original young form, ready to challenge the Dark Man to a duel. Their epic battle takes up a large part of the oversize 100th issue. After an apparent victory, the Fables find themselves still in peril, initiating a new chapter in Fables history. The anniversary issue is full of other fun things: stories illustrated by cover artists Chrissie Zullo and Joao Ruas; a story written by series artist Mark Buckingham and illustrated by Willingham; Celebrity Burning Questions; as well as a puppet theatre and a board game. This collection also adds a Buckingham sketchbook.