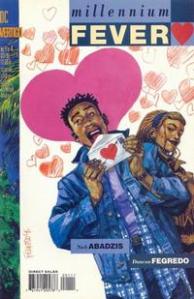 Next up is a four-issue miniseries called Millennium Fever by Nick Abadzis & Duncan Fegredo. On the face of it, it’s a fairly straightforward romantic comedy. But at the end of the second issue Maiya, the mysterious woman our protagonist Jerome met through a personal ad, has apparently changed into a man overnight. And things got even stranger before the end. Fegredo’s art is gorgeous, and Abadzis created a cast of very believable characters. I remember being disappointed by the conclusion when I read it the first time, and I still was on rereading…just too cosmic for me. The entire 4th issue is one big psychedelic trip through the Anima Mundi (Earth consciousness). Well done, but still too far for my suspension of disbelief. I certainly give it credit for attacking the Millennium concept long before it became common currency. They even beat Grant Morrison to the punch on that, although The Invisibles was on Issue #16 at the time of the last issue of this series. 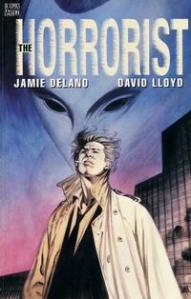 The Vertigo Wayback Machine has found its way to late 1995, with another Hellblazer story, a two-part Prestige format mini by Jamie Delano & David Lloyd called The Horrorist. An extremely bleak tale, which finds a soul-dead Constantine chasing after an African orphan who seems to bring horror with her wherever she goes. The story concludes with lots of large scale horror, which is what the title promised, after all. In the end Constantine reconnects with humanity and recovers his sense of empathy. This almost justifies all of the pretentious nihilism that precedes it, but not quite. It’s an interesting Hellblazer side trip (I don’t think of it as “in continuity,” though that rarely plays a big role in Hellblazer anyway), but I can’t say I recommend it. 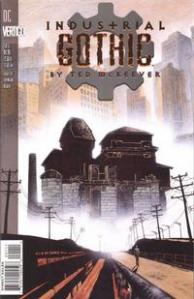 Industrial Gothic is a five issue miniseries by Ted McKeever, cover dated December 95 – April 96. It’s a story set in a dystopian near-future. People who do not conform to the accepted standard of physical beauty are consigned to guarded detention centers. When Pencil and Nickel escape, they find a crumbling world outside. They set off on a quest to find the legendary Aluminum Tower. It can be a pretty heavy-handed social satire–the fact that Nickel is a torso without full arms and legs may be laying the symbolism on a bit thick–but imaginative enough to get me involved in this strange couple and their quest. After more adventures the couple splits up, but Pencil continues the quest and finds the legendary Tower. It’s a disappointment, but it does lead him to a town where he can make a life. Nice quiet conclusion which loops back to his life of imprisonment. Even though this was only five issues long, letter columns were important enough that Vertigo sent out advance copies, so all of the issues contained a letter column. They actually printed one negative letter in the last issue, which pointed out the lack of originality in the concept, as well as taking McKeever to task for portraying all of the women in a cliched, sexualized way. McKeever wrote an indignant response in defense, accusing the female letter writer of “knee-jerk analysis.” I think the critique was valid, though. It makes the series rate a B at best (compared to other Vertigo miniseries), despite the effective storytelling.

The four-issue Prestige format miniseries Blood and Shadows by Joe R. Lansdale & Mark A. Nelson is a horror story about a dimensional being called the God of the Razor. When he enters our world he manifests as a grisly serial killer, one who skins and dismembers his victims. The protagonist is a small-time private detective named Chet Daly, and the story begins in East Texas in the 1940s. As he attempts to find his lover’s missing brother, he slowly comes to believe that the God of the Razor exists. The 1876 journal of Western scout Justice Jones may hold the key to defeating the killer. The second book is entirely devoted to Jones’s journal, recounting his encounter with the Razor, and it ends in a cliffhanger. The series goes off in some strange directions in Books 3 – 4. Justice Jones’s journal concludes with a provisional defeat of the God of the Razor: he’s at least sent away, and Jones survives the encounter. Back in the present, Chet finds out how to follow the Razor, and finds himself (and his revived lover Ida) in a dystopic future. Think “Mad Max,” with even more blood and explosions. Lansdale comes up with some interesting bounty-hunter characters, and a bizarre fundamentalist “Do Right” cult. The cult provides the Razor a body to inhabit, dressed as a clown for added irony. Chet and Sweetie the bounty-hunter manage to defeat the Razor, but only apparently. An alligator wearing a top hat is seen in the sewers on the final page…leaving room for sequels, but an inconclusive and confusing finale. The whole miniseries is a mess, as though Lansdale just threw in one crazy idea after another without an overall plan.

Vertigo published a Prestige format one-shot called Dog Moon, written by Grateful Dead lyricist Robert Hunter and painted by Timothy Truman (the artist on the Vertigo Jonah Hex stories). This is an odd one, a dreamlike horror story about a truck driver who transports the “just dead” to the next place in their journey. When he falls in love with a dead woman named Tess an even stranger series of events unfolds, revealing his history and the reason for their connection. It’s sort of a hippie take on the Greek myth of Charon, the ferryman of Hades, complete with epic language and the river substituted with the ocean (different, but still water imagery). In the Afterward Hunter points out his choice of using only single-syllable words, which probably explains why the language seems so stilted.