Vertigo miniseries tour Part 5: Mobfire; Tainted; The Heart of the Beast; Ghostdancing; Jonah Hex: Riders of the Worm and Such; Kill Your Boyfriend 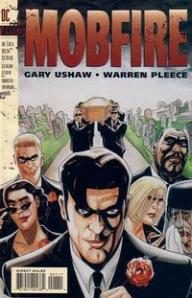 The miniseries Mobfire by Gary Ushaw & Warren Pleece is about a powerful mob family that uses black magic, very much in the Hellblazer mold. In fact John Constantine makes a cameo appearance in the first issue, the only time I can recall a DC character appearing in a creator owned book. Definitely an above-average mini, and Pleece’s painted art suits the subject well. John Constantine appears again in Issue 5, and plays a prominent role in the entire issue. So if nothing else it’s an interesting “guest appearance” for him: there haven’t been that many, considering how long the character has been around. But it’s a good story even without him, and I’m surprised it never saw paperback collection. Worth seeking out in bargain bins if you’re a Hellblazer fan. 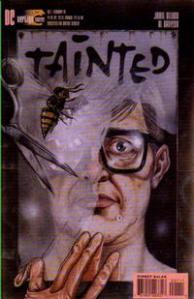 The second “Vertigo Voices” one-shot is Tainted by Jamie Delano & Al Davison. This is an extremely creepy story focusing on George Palmer, a rich man with a clouded history, and his two unsavory lodgers. As the three become increasingly involved, things get darker and darker. In the end George’s secret is even worse than it looked at the beginning, and everything comes to a bad end. Very much a doomed noir scenario. Bleak, but very well done.

The Heart of the Beast by Dean Motter, Judith Dupre, & Sean Phillips surely must be one of the most obscure Vertigo publications. It’s a 96-page hardcover original graphic novel, published in 1994, which was well before the format became common. The story is a modern retelling of Frankenstein (actually a kind of continuation, but I don’t want to spoil too much) set in the New York art world. I wouldn’t go as far as calling it a “lost classic,” but it is well worth reading. Beautiful painted art by Sean Phillips, also including a bit of painting combined with photographs. Especially recommended to Phillips fans: I’m surprised it’s never been reissued in paperback form.

The 1995 miniseries Ghostdancing by Jamie Delano & Richard Case is a strange New Age mix. Here’s the “On The Ledge” blurb for the first issue: “Faded rock stars, Native American Power-beings, myth-magic and a new drug called Ghostdancing conspire to bring about a new world where man can coexist with nature in this apocalyptic tale for the millennium.” Delano lays all subtlety aside by presenting this conflict in literal conspiracy terms. There’s an actual organization called the Mammonites who have been actively suppressing Native American beliefs: “We Mammonites have spent five hundred years schooling the minds of disparate immigrant peoples…to ensure the supremacy of our ideology whilst providing the illusion of free will.” Nothing heavy or paranoid there 🙂 Case got to draw lots of animal spirits (including the awe-inspiring Thunderbird) and buffalo, which he does well. Fortunately Delano creates interesting characters and sets them in motion right away, so there’s plenty of action, even with the necessary setup. And we get the expected apocalypse in the end. The ending is a bit open ended, in that the Mammonites are not completely defeated, and the trickster Coyote spirit chooses to follow the human refugees to the eastern ocean where he can cause more trouble. Could have been a sequel, I suppose. 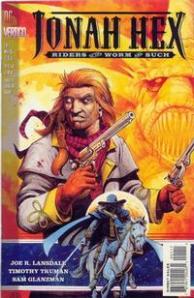 Jonah Hex: Riders of the Worm and Such was the second Vertigo Jonah Hex miniseries, again written by Joe R. Lansdale, with pencils by Timothy Truman and inks by Sam Glanzman. Like the first miniseries, this is a gritty Western with some really inventive elements. In this case, huge carnivorous underground worms, and the Wilde West Ranch and Music and Culture Emporium. I’m just glad I can’t actually hear the awful songs those cowboys are singing. It didn’t work quite as well as the first mini for me, mainly because the big climax was so fantastical…kind of took things out of Western territory too much. This was the miniseries that included the characters Johnny and Edgar Autumn, which was the subject of a libel suit by Johnny and Edgar Winter. It sure looks like a deliberate parody of them to me, but the lawsuit was ultimately decided in the creator’s favor.

I’ll close out this entry with my reread of Kill Your Boyfriend by Grant Morrison & Philip Bond, the third title in the “Vertigo Voices” series. This is the Vertigo summary of the reprint edition, which summarizes the plot and the style:
“Slim and fast, KILL YOUR BOYFRIEND is perfectly teenaged pop perfection, equal parts glam and bang, sex and violence, whimsy and menace.” — Matt Fraction on artbomb.net
A Vertigo cult classic returns with this new, third printing of KILL YOUR BOYFRIEND, written by Grant Morrison (FINAL CRISIS, THE INVISIBLES) and illustrated by Philip Bond (VIMANARAMA) and D’Israeli (THE SANDMAN). Originally published in 1995, KILL YOUR BOYFRIEND is an over-the-top black comedy of rebellion and teen romance topped with a heady mix of random violence and dark humor.
A British schoolgirl yearning for excitement joins up with an angry rebel boy intent on tearing down middle-class England. Through their violent, anti-authority joyride – filled with sex, drugs, and anarchy – Morrison offers a scathing, often-hilarious take on the British suburban landscape, where edgy behavior provides an escape from sanity. This new printing also includes Morrison’s 1998 afterword to the story and the origami “fortune teller,” with bizarre messages specially created by Morrison.”

I read the original edition, so there was no afterward or origami. I tried to find the afterward online, but the best I could do was a Morrison Newsarama interview on the occasion of the reprint.

Reading this again, I was struck by how absurd it is: it really is a black comedy above all else. There certainly is some social commentary, but it’s so over the top that it’s hard to take it seriously. The teenage protagonists are doing the age-old teenage protest against authority, but they’re doing it with guns. The bit about Dionysus and his female followers the Maenads which Morrison mentioned in the afterward and the interview is actually briefly brought up in the story (p.4, by the Girl’s high school teacher). But then then the narrative quickly goes on its merry ultraviolent way. I thought the most direct target was the group of avant-garde artists, with all their revolutionary talk that turned out to be just talk.

There are really two endings. The first is the conclusion of the killing spree, where the Girl resolves to go all in by shooting her father, only to discover that she’s out of bullets. Presumably she miraculously escapes all blame, because on the final page we see her ten years later as a housewife with a young daughter. She is slowly poisoning her husband with rat poison (earlier she had added “I’m a housewife with a jar of rat poison” to her list of possible personalities). So this is her revolt against the boring life she wound up with? It’s all done with a wink to the reader, so we probably shouldn’t read much into it. 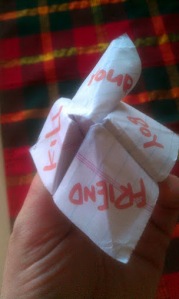 The assembled fortune teller. You can see I had trouble with the folding!

UPDATE: Since posting this I got a copy of the reprint.  The reprint is in Prestige format, so it’s a more substantial book than the original.  The Afterward says a lot of interesting things about the genesis of the story (although it’s much briefer than the Newarama interview linked to above). And there’s an origami fortune teller, which I color photocopied so I could make it without damaging the book (the fortune teller is drawn on a piece of lined notebook paper, and fills about half a page). I remember these from childhood, but had never made one myself. I couldn’t quite get the folding right from the diagrams in the book, but a YouTube video got me past the final fold I was getting wrong. It’s a cool little addition to the package. I wonder what made Morrison think of it? 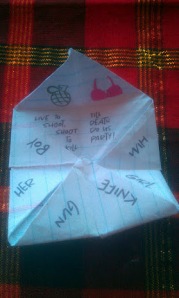 The fortune teller telling a fortune.