A crime story with a twist: Rowan Black is a homicide detective with the Portsmouth Police Department, and she’s also a witch. In fact the story opens with her coven in the middle of a ceremony in the woods–her cell phone interrupts the proceedings, calling her to work. There is a hostage situation, and the hostage-taker has asked for her by name. When she goes in she confronts a man she does not know, but he is determined to burn her as a witch, so he somehow knows what she is, if not who she is. She is unable to break the spell which compels him, and is forced to reverse the burning in self-defense.

So magic is clearly real in the story: there is no ambiguity. At the same time Rowan is a real cop. She and her partner work a murder that seems unrelated to the attack on Rowan while also attempting to identify her assailant (of course she did not reveal the magical aspects of it). Two very odd facts emerge: the corpse is missing his left hand, and the assailant’s name is Rowan White. Both things have magical implications.

By the end of this first story arc the stakes have been raised considerably. Rowan and her coven appear to be under surveillance by a mysterious European secret society–which would be dangerous enough–but there is also what looks like demonic involvement. It would be a shame if Rowan’s police identity were completely overshadowed by her role as a witch; there is some interesting potential there. But the series is off to a good start. Scott’s art is distinctive. She has an expressive, realistic style, which is rendered in gray wash for the most part. It’s a sort of charcoal effect, but there are dramatic flashes of color when magic is present. Her women are notable for being exceptionally attractive, yet also realistic. For example, in the early scene where Rowan has to strip so the hostages will be released, she looks attractive in her underwear, but not overly sexualized. It doesn’t look like a Victoria’s Secret ad: she’s even wearing striped socks, just like a real woman. 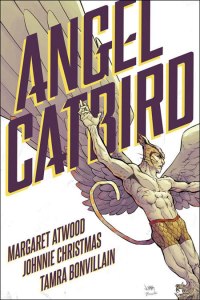 Renowned author Margaret Atwood has come to comic books late in her career–but in her Introduction she says she’s a long time fan. In fact she even drew her own, and the Sketchbook section in the back of this volume includes a page of her character design sketches. Angel Catbird is about a young genetic engineer named Strig Feleedus who becomes accidentally mutated when his experimental serum merges his DNA with that of a cat and an owl.

Bizarre as that may seem, things quickly become much stranger. He finds that there is a population of half-cats (people who can transform into cats) and half-rats (people who can transform into rats). Of course they are natural enemies. The cats count a vampire cat among their number, named Count Catula (naturally). It’s all a bit pulpy and silly, with lots of cat puns.

There is a reason why Angel Catbird combines cat and bird: he embodies the conflict between carnivore and prey. Atwood also has a serious agenda of saving birds from cat predation and keeping cats safe, so there are tips scattered throughout the book, with links to a website for more information.

It’s a wacky combination. I doubt I’d have even given it a second look if not for Atwood’s reputation. And while it was entertaining enough, I don’t expect to continue reading it. 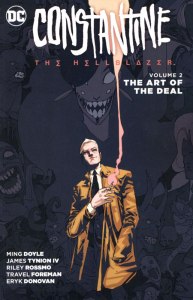 The second (and final) collection of what wound up being a limited run between the DC’s New 52 and Rebirth. A lot of it revolves around John’s relationship with his new male lover Oliver, which I found not entirely convincing–there’s just not enough time for it to develop a strong connection for the reader. But it does drive the plot significantly, which is a rare thing in the Hellblazer world. The opening issue takes up the question of what is causing all of the magical disruption in New York City, beginning with killer trees in Central Park. Logically enough, John gets a visit from the Swamp Thing.

The events in the park prove that something is going on, but then John finally reaches Oliver’s cell phone, only to discover that Papa Midnite has taken him hostage. Midnite seeks Constantine’s help getting his club and magic empire back–it turns out John’s old nemesis, the demon Neron, is behind everything.

So of course Constantine and Midnite wind up in Hell–which is hellish, imagine that. As usual John finds a way out, leaving Midnite and the demon Blythe behind. He travels through Faerie to Los Angeles, where Deadman manages to take over his body long enough to get him on a plane back to New York. There he discovers the cost of breaking a contract with a demon: he is unable to move against Neron. But in typical Conjob fashion he figures out an alternative. With the help of Zatanna, Deadman and Swamp Thing he works a spell taking the magic out of the city, making Neron’s souls virtually worthless. It’s a neat trick, but unfortunately his usual luck obtains when it comes to Oliver’s fate.

A good Constantine story overall, with two nice plot twists at the end. Can’t help but feel the DCU connections were a little strained, but they were fun (Swamp Thing especially). The art again went through changes over the course of the run. Riley Rossmo provided most of the internal art for the first few issues (along with the covers); Travel Foreman took over main duties for two issues–he has a compatible style, as well as history with this part of the DCU (e.g. Animal Man). But the series ended with two issues by a new artist, Eryk Donovan. While his style is quite compatible with Rossmo’s–who did the covers all the way through, providing some consistency–it still requires an adjustment, which always strikes me as a poor way to end things.

It should be mentioned that there is some obvious–if not downright heavy-handed–political commentary in this arc. Titling it “The Art of the Deal” should be enough to telegraph the Donald Trump references. Neron also has a somewhat Trumpian pompadour hair style. The clincher is his speech to his demon followers to “make Hell great again” (the TV show Supernatural used the same trope recently). Hellblazer has been known for political references off and on throughout its life, so in that sense this fits right in.