Brubaker and Phillips return with their latest crime noir series, about an urban vigilante named Dylan. The series opens with Dylan in action, but quickly backtracks to explain how he got there. He was not a well man: an aging graduate student with no clear direction, lonely, feeling like he lost his best friend when she started dating his roommate. After a few aborted suicide attempts, he finally leaps off a roof, only to miraculously survive.

He’s grateful to be alive, and at this point the story takes a supernatural turn (in that way it’s a bit like Fatale, the creative team’s previous supernatural noir series). Without totally spoiling the plot, he is told that he has his life because of a bargain: he must take a life once a month to stay alive. He has trouble believing it at first, and in fact it’s not clear whether the whole thing is in his head.

But after mysteriously falling ill he does believe it. So then it becomes a practical problem: how does he choose people who deserve to die, and how does he kill them? There’s an interesting consideration of the whole vigilante dynamic. For example, crimes definitely happen on New York City subways, but the average rider never sees them. And if you did, there are cameras everywhere, making taking action a risky proposition.

Dylan begins to live a secret life, going out at night seeking worthy victims and executing them. To further complicate things, he begins a secret love affair with his friend Kira, so now there’s a love triangle to go with his vigilante identity. When he takes a beating during a killing, it appears to be the end of the love affair, but not of the friendship. The final panel is a tantalizing visual clue from one of his father’s illustrations. Is Dylan experiencing a childhood memory, or was his father haunted in the same way?

The long-delayed conclusion to the Phonogram series, with the focus shifted to music videos. Phonomancer David Kohl’s efforts to save his Britpop goddess, Britannia, was the focus of the first collection. David’s coven leader, Emily Aster (and her struggles with her dual personality)  was the focus of one issue in the second collection. Emily is the Immaterial Girl of the title here: the story is an explanation of her dual personality, and what she does to resolve it. David is present again, mostly as an observer, but he provides some continuity to the entire series as a supporting character.

The current action starts in 2001, but the primary musical references date back to the 1980s, when Emily made her deal with “the king behind the screen,” a kind of video god. The video for A-ha’s “Take On Me” is the central image of the miniseries: it’s the basis for the second issue, and recurs throughout. Bryan Lee O’Malley’s Scott Pilgrim Vol. 1 (Precious Little Life) gets an homage in the mostly black-and-white issue four. Other references include the videos for Bonnie Tyler’s “Total Eclipse of the Heart,” Dire Straits’ “Money for Nothing, ”  and Madonna’s “Material Girl” (obvious title reference there).

Emily’s struggle to resolve the two sides of her personality is an extended one, and offers plenty of visual possibilities. It happens in both the real world and the video world, so the characters interact with all those famous video images. Regardless of how much the reader loves pop music–and Gillen is clearly completely obsessed with it–in the end the story revolves around magic, so there has to be considerable suspension of disbelief. There is a lovely bit near the end where David uses some of his remaining magic power to send Indie Dave to New York City, a place dear to his musical tastes but which he had never visited.

There are tons of references to other pop music of both decades as well, and in case you didn’t catch them all there’s a Glossary at the end that lists them alphabetically. I don’t think you need to get all of those allusions to follow the story, but it’s hard to image it having much impact for anyone who doesn’t remember those music videos. I was disappointed that Phonogram appeared to be over after the second series, so I had high hopes for this one. It’s a nice bookend to the story, which wraps up some important character’s stories. I look forward to rereading the whole thing some day. If you read the first two I certainly recommend the third. It stands on its own pretty well (you don’t have to remember the previous stories in any detail to follow it; there’s enough context given), and does feel like a satisfying conclusion. Not so final that it closes out any possibility of future sequels, but there don’t seem to be any planned.

Volume 2 left off with a helicopter sent by the mysterious Mr. Blackwood. But before that story resumes, we get an origin story for Cicero, the FBP field agent with the crazy hair. He seemed destined to become an FBP scientist, but reading the collected papers of rogue scientist Professor Hardy convinced him to grapple with the new crazy physics more directly. As we discover, he is the father of Agent Adam Hardy, so he has already figured heavily in the story. He’s supposed to be dead, but this is crazy physics…

Adam makes the acquaintance of a woman with a precocious young daughter named Ina. They give us an Everyman perspective on the collapse of the world. Blackwood tries to convince the FBP agents to join him in Project Audeamus, which he claims will use a dark matter generator he invented to restore the dark matter needed to prevent the collapse of reality.

This volume saw the departure of artist Robbi Rodriguez, co-creator of the series. Can’t say I can recall a series going on without one of the creators. But artist Alberto Ponticelli stepped in with a compatible visual style, and got to create some new characters as well. Cover artist Nathan Fox stayed on, giving some additional visual continuity (he also helped out a bit on interiors). 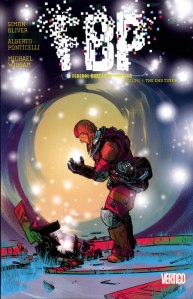 Looks like the end in more ways than one at the outset of this collection. Ina and her mom are witnessing the complete collapse of society, while the FBP group learns that Blackwood may have a secret. Hardy takes the first craft into interdimensional space. He survives against all odds, and eventually the real purpose of Audeamus is revealed: it’s an A.I. escape hatch for the rich backers of the project. They leave the world behind before it completely disintegrates. When Adam connects he meets his father, still existing in interdimensional space, and offering the chance for a reunion.

But Adam sees that his escape will be at the expense of the entire human race, and makes his choice. In the end the world is still in the midst of crazy physics, but it’s still there. And a grown Ina is an FBP agent, on the case to protect mankind from the impossible–never forgetting that the impossible is always possible. Not a stereotypical happy ending, but a satisfying one, and full circle in a way.