With Animal Man Vol. 2: Animal Vs. Man I’m just now getting to the second installment in the War of the Rot (Volume 3 is already out, so I’ve fallen behind). It’s still moving very slowly…at the midway point Buddy Baker and family are still on the run, and they still haven’t met the Swamp Thing. There has been one interesting development: Buddy has apparently died and gone to the Red, and the Rot have taken over his abandoned body. There’s a nice callback to the original series as Buddy recalls meeting his creator (“He was this skinny, intense, Scottish guy who claimed I was just a character that he wrote in a comic book”), a reference to the famous conclusion of Grant Morrison’s run.

Annual #1 occupies the middle of the collection. This works because of the loose ties to the monthly continuity: it features the talking cat (former avatar of the Red) telling Maxine (current avatar of the Red) the story of the last time Red and Green united to battle the Rot. So we get to meet an earlier Swamp Thing, and get a preview of the coming battle.

Issue 9 concludes with the appearance of John Constantine. So the gang’s almost all here.

Animal Man meets his maker in the original series

Not just Constantine: Zatanna and Madam Xanadu have also come to see the Bakers. Not to help them, just to warn them. Which gives DC an opportunity to further the world-building around its stable of magical characters, but doesn’t actually advance the plot much. Constantine does throw out an interesting clue, though. After telling the family “It’s the big green guy you need to find,” he follows that with “Wait till she realizes I wasn’t talking about Swampy.”

Meanwhile Buddy Baker has his audience with the Totems of the Red. They tell him they can’t put him back in his body–it has already been overtaken by an agent of the Rot–so they decide to build him a new, stronger body. When he returns his powers have indeed been amped up considerably: he uses them to rescue Cliff from himself, in the form of his former body. The arc ends with Cliff warning them about the impending arrival of Arcane.

The Zero issue is the final story in the collection. It tells the story of the Animal Man’s origin, retconning it as an intervention by the Red. The Red knew that Maxine would be the next avatar, so they gave Buddy limited animal powers to prepare the way. And the alien abduction scenario in the original origin is a hoax they cooked up so Buddy could understand what happened to him in more familiar terms.

So the image of the Swamp Thing on the cover is a big tease: we only see him in flashback. But one thing is clear: life requires the Red, the Green, and the Rot, but they must be in balance. The Rot is beginning to dominate the other two, threatening the balance, and therefore life itself. By the end of this collection I felt like that had been mentioned about every other page, but I’m sure I’m exaggerating.

More catch-up reading, this time the short lived Vertigo series Dominique Laveau, Voodoo Child: Requiem created by Selwyn Seyfu Hinds & Denys Cowan (with John Floyd doing most of the inking). It’s an atmospheric New Orleans story about a magical voodoo dynasty that ran for seven issues. There was a short introductory story in the anthology The Unexpected, which opens the collection. I’m not sure it did the series any favors. Although it sets up the family history and the central conflict in the series, it’s a confusing, mystical little tale that doesn’t stand up by itself: more off-putting than intriguing, at least for me. The series opens up in the present, with the contemporary Dominique on the run from a werewolf. That’s only the first of many supernatural elements central to the story, including loas (Vodou spirits), vampires (although they don’t appear in the first few issues), and a Voodoo Court that operates behind the scenes to keep the supernatural beings in balance.

It’s a lot of suspension of disbelief to ask of the reader, even a longtime Vertigo reader like me. The New Orleans setting (post-Katrina in the present) helps. This kind of lore has long been associated with the city, plus it offers lots of visual appeal for the artist.

The title arc occupied the first five issues, and tells the story of Dominique’s trials and ascension to Voodoo Queen. It’s a complete story (even says “Finis” at the end), even though it must have been intended to be the basis for the rest of the series. Instead we get a standalone story about Black Benny, and the series-ending “Ascension.” Set six years from the beginning of the series (in 2012), it fast-forwards through Dominique’s reign to show the end of her Court. Although it’s nice to get an ending, it does feel abrupt. It reads like it may have been the planned conclusion to a much longer series. Even so, the possibility of further stories is left open. As Dominique ascends (to the spirit world, I suppose) she declares “You will see me again.”

I thought the storytelling was weak overall. Hinds starts out going in several directions at once, and never does settle on a focus. Even the issues where Dominique undergoes a spirit trial with the loas failed to fully engage me. Part of the problem is my complete lack of interest in voodoo beliefs–I just barely tolerated them in small doses in Hellblazer and The Invisibles–but better writing could have overcome that. I have to say that there are definite signs of rushing due to early cancellation. Hinds and Cowan devoted a fair amount of story time setting up Dominique’s involvement with Tasha and Tayshawn, two young homeless Katrina orphans. The only payoff comes when Tasha appears in the final issue at Dominique’s side, a sign of the developing relationship that had probably been planned for the ongoing series. Likewise there’s Dominique’s policeman boyfriend Allan. He figures pretty prominently in the early issues, then has his memories of Dominique and the Voodoo Court erased. She promises to make things right, but never gets a chance. 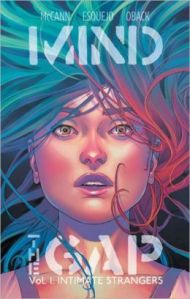 Mind The Gap is another entry in the strong recent Image catalog. It’s a mystery, with a twist. As the story opens Elle, daughter of a rich couple, has been attacked in the subway. We meet her in the hospital, in a coma: but she’s having an out-of-body experience, so she is a conscious witness to the situation. Mind The Gap Vol. 1: Intimate Strangers collects the first five issues of the series. Writer Jim McCann gets sole creator credit, which is a bit unusual. Main artist Rodin Esquejo and colorist Sonia Oback also get cover credit.

The cast of characters include Elle’s parents, her brother, her boyfriend, and her best friend. There’s also a mysterious operative in a hoodie, who may be the unknown assailant. But initially everything is a mystery: Elle can’t even remember who she is at first. Just about everyone seems to have a secret agenda: the inside covers remind the reader “Everyone is a suspect. No one is innocent.”

Elle’s therapist, Harold Crenshaw is also involved in something shady. He’s in the process of delivering a mysterious case when an arranged traffic accident puts him in the same hospital as Elle, also in a coma. The soon meet up in “The Garden” in spirit form, so Crenshaw’s attempts to get her to remember become part of the mix. For some reason she does not remember being his patient, but he remembers her. Doctor Hammond, the doctor in charge of her case, also seems to have a lot to hide (Doctor Geller,another doctor on the ward, has suspicions and surreptitiously begins to investigate) . There are intimations that it may be due to the Peterssen family’s financial support of the hospital: and after the big reveal near the end of Issue Five, that does seem possible.

Issue Five also fills in the family history of Elle’s boyfriend Dane. He stands accused of assaulting Elle, but it’s soon clear that he is being framed. His estranged father enters the picture. In addition to being no friend of Dane, he also seems likely to be a loose cannon as a co-conspirator.

The plot is definitely deepening as the series goes on. But I think the ratio of new secrets to revelations is a good one: I feel like the story is moving forward, even if a lot is still murky by Issue Five. I’d contrast that with the progress of Morning Glories, another current Image series with a mystery at the center. There the mysteries keep piling up. Even the issue that was supposed to hold the key to the timeline of the first part of the series was confusing!

I like Rodin Esquejo’s art very much, and am surprised that he does not get co-creator credit. It’s a fairly realistic style, similar to a number of other current Image artists (which is ironic, given the highly stylized work of the Image founders). He does an especially good job designing distinctive characters: there’s never any confusion about who is who.