Swamp Thing Vol. 1: Raise Them Bones is the first collection of the New 52 version of Swamp Thing (written by Scott Snyder, art by Yanick Paquette & Marco Rudy). Fans who wanted to see Swampy back in the DCU certainly get their wish right away, as the first few pages show Superman, Batman, and Aquaman. Superman visits Dr. Holland, providing a useful pretext for exposition of the back story.  Which somehow manages to respect Swamp Thing history, while still giving us a different Alec Holland. This one died in a lab accident but was reborn (as in the original origin story), however his memories of being reborn as Swamp Thing are false memories. So he remembers being Swamp Thing, but he really wasn’t, even though the Green insists he is fated to take up that mantle. I’m not sure if you’re better off knowing the character from before, or starting fresh. Anyway, the rise of the Rot is front and center in the story right from the beginning (before we’re even told what it is). It seems clear that an Animal Man crossover was in the cards all along. Abigail Arcane is similarly slightly re-imagined. She and her younger brother William (who I believe is a new character) have both been given a deep connection to the Rot, making them natural opponents to Swamp Thing and the Green. The series finally truly gets to the point in issue 7: ladies and gentlemen, we have a new Swamp Thing. He’s recently reborn, and he’s angry. I enjoyed the trip, but it could have been shorter. In some ways this entire arc looks like setup for the series. Now the war between the Green and the Rot begins in earnest. And ST is more concerned about Abby’s fate than he was for the Parliament of Trees, which I think rings true for the character during the original run. The art makes frequent use of creative panel placement, a call back to the style of the original series. After awhile I started wishing for fewer jagged multi-panel layouts, though. It got a bit overused, and the action and dialog were hard to follow. 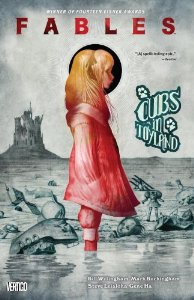 Fables Vol. 18: Cubs in Toyland picks up with Bigby and Snow’s cub Winter being trained to be the next North Wind. But fellow cub Therese’s toy boat takes her on a magical journey, where she is crowned as the new Queen of Toyland. As soon as the family realizes she’s missing a search begins. The first one to get to Toyland is her brother Dare, riding the magical tiger Lord Mountbatten. Meanwhile back in Fabletown the Fables are moving into Castle Dark, left behind by the defeated Mister Dark. There they encounter Miss Spratt pretending to be a prisoner: no indication yet what form her revenge will take. Toyland certainly shows a number of dark corners early on, but Dare and Montbatten’s rescue attempt swiftly takes the story down an extremely dark path. In the end Therese grows into a true queen, but it requires the brutal sacrifice of both of her would-be rescuers. She and the bad toys then slowly redeem themselves. Her visit home to give Snow and Bigby the news of the fate of their two lost children is among the most bittersweet in the series so far. In the two part story “The Destiny Game” (beautifully illustrated by guest artist Gen Ha) Willingham tells another early tale of Bigby Wolf (referred to here as “the Great Wolf”). We discover how Bigby narrowly avoided an early death at the hands of a witch, exchanging that fate for the long, enchanted life we have seen him living. The story is being written down “many years from now” by a man who appears to be one of the cubs. The backup stories continuing Bufkin’s adventures in Oz are not included. leaving that story dangling until the next collection. 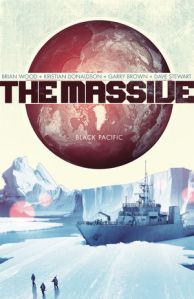 The Massive Vol. 1: Black Pacific is the first collection of Brian Wood’s dystopian series, which is kind of a spiritual sibling to DMZ. The disaster here is much bigger, though: it’s an environmental disaster of global proportions called the Crash. The environmental group Ninth Wave chooses to remain at sea rather than join emergency forces on land. So much of the story takes place on board the ship Kapital, giving it a claustrophobic feel. And it’s bleak: the group finds themselves battling pirates who are after any useful dwindling resources. Artist Krisian Donaldson (Garry Brown on the second arc) and colorist Dave Stewart do what they can, but it’s a bit monochromatic by design. Numerous flashbacks provide a change of scene along with background information (although the cause of the Crash appears to be unknown). But even here there is a pervading grayness, and the time frame can be confusing, despite Stewart’s helpful color shifts from scene to scene. After six issues it is still unclear whether sister ship the Massive (from which the series takes its name) is still afloat, or where it might be. Wood has certainly created an interesting group of misfits: former mercenaries, an idealist, a Russian mobster, and a mystery woman named Mary (she’s brave and resourceful, but no one knows anything about her). They all have secrets, often follow their own agendas, and are not always likable. So there is lots of story potential here, if you can get past the depressing setting.