100% was a five-part miniseries by Paul Pope, his second creator-owned project for Vertigo.  Pope called it “A Graphic Movie,” and it’s in black and white (with gray tones by Lee Loughridge). In the forward to the fourth issue Pope says that Vertigo had given him carte blanche for another project after Heavy Liquid was completed in late 1999. Pope proposed a series of short stories, but Vertigo wanted a single story. So he took the best short story elements and wove them together into a single tale, tying them together by setting all of the action in and around a nightclub where most of the characters work.

The story is set in Manhattan, New York City in January 2038. As usual Pope created an elaborate background, which shows up in many details of the setting, both large and small. Some of the inside covers explain contemporary products used, as well as giving faux news items that illuminate social and cultural aspects of this world. First we meet Kim, bartender at a club called The Cathouse, and Strel, the dance manager at the club. Busboy John quickly develops a crush on Daisy, the new stripper. Haitous, a huge fighter, is eventually revealed as Strel’s estranged husband; and struggling artist Eloy is Strel’s cousin. So the entire cast either works at the club or are related to Strel. 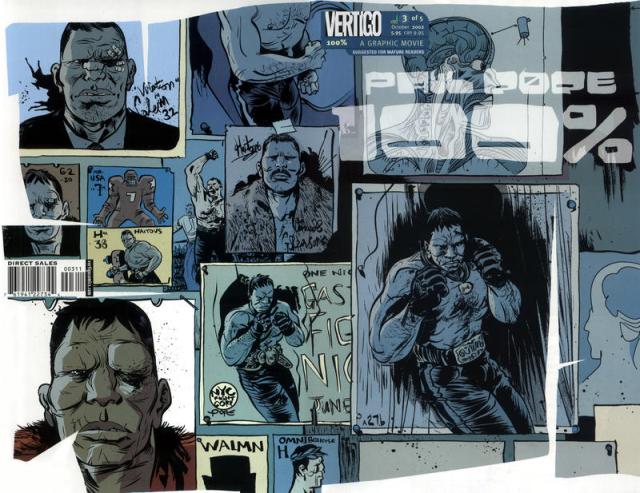 The restriction seems to have helped the story, giving the individual stories a bit of additional framework. The six focal characters are all quite memorable, and likable in their own ways. Their stories are all ultimately romantic (Pope also referred to it as an “American Manga”), which he makes less obvious through the futuristic, cyberpunk setting.  I was definitely pulling for these characters. Not all of the couples come through together, but they all get a satisfying ending. This remains my favorite Pope story, and a standout in the Vertigo catalog.

That being said, there is one aspect of the story that has always bothered me, as a musician. The teakettle symphony in the story features a room full of teakettles, all “tuned to C Major.” To me that means either a C major chord (the notes c, e, and g), or possibly the notes in the C major scale (c, d, e, f, g, a, and b). But later on the story makes it clear that they are all tuned to the note C, just in different octaves. In my imagination that is indeed a cool sound. But you can’t define a key by one note.

Freelance Journalist & Musician; Senior Contributor, All About Jazz.com; writing on comics at mrvertigocomics.com & No Flying, No Tights.com
View all posts by marksullivan5 →
This entry was posted in miniseries, Vertigo comics and tagged Paul Pope. Bookmark the permalink.