Still back in 1994 with Vertigo: a “Vertigo Visions” one-shot, Dr. Occult by Dave Louapre and Dan Sweetman. It’s got an odd introduction which reminds us that Dr. Occult was last seen in The Books of Magic miniseries, but with jokes like “Chaos doesn’t do lunch.” The story’s not at all light-hearted, though. Dr. Occult and his female alter ego Rose find themselves thrown into an identity crisis while attempting therapy with a young female sexual abuse victim. Not bad, but Louapre tends to overwrite, as he did with the earlier American Freak: A Tale of the Un-Men miniseries.

The creator owned series of one-shots called “Vertigo Voices” began with Face by Peter Milligan & Duncan Fegredo, cover date January 1975. This is a truly creepy story about a plastic surgeon hired by a famous reclusive artist. The surgeon and his wife arrive at the artist’s private island, and unpleasant surprises ensue. It’s very effective, but I found myself noticing how dialog-heavy it is. That’s a potential pitfall in any project that is writer-driven, and it pops up frequently in early Vertigo.

The Prestige format one-shot Mercy, by J.M. DeMatteis & Paul Johnson was one of the titles Vertigo inherited from Disney Comics’ aborted Touchmark Comics imprint. It tells the story of a cynical man in a coma who witnesses the personification of mercy battling human weaknesses (also personified, as demons): he finds the quality of mercy within himself, and awakes. This is DeMatteis at his most mystical, but it does work as a story. Beautiful painted art by Johnson.

A different sort of mysticism suffuses Rogan Gosh by Peter Milligan & Brendan McCarthy. It’s an adventure story/search for enlightenment in the guise of an Indian comic book (also sometimes described as as an “Indian science fiction series”). Originally published in the British anthology Revolver, it was sufficiently baffling to readers that Milligan included an Afterward in this edition which explains how to read it (sort of). It’s a crazed psychedelic narrative that follows two guys on their spiritual journey, through other realms, England, and India. It also features Rudyard Kipling, and a young man who commits suicide at the end. It’s the young suicide’s story that resonates the most for me, possibly because it is presented the most realistically. McCarthy goes nuts on the visuals; it’s the wildest coloring I can remember in a Vertigo comic. None of that drab earth tones stuff here!

Vertigo took on a traditional horror theme–vampires–in the miniseries Vamps by Elaine Lee & William Simpson. This must have been very successful, since it got the TPB treatment plus two sequels. Damned if I can see why. The basic “biker chick vampires” concept is cool in a B-movie way, but so much of the treatment is corny and overwritten. The vamps are all Southern girls, so Lee insists on writing the dialog and narration with an accent. This just about never works, even though Lee was writing from experience (the Southern part, I mean). And the endless linking of bloodsucking with sex got tiresome quickly. But I suppose that’s part of the appeal for some. The subplot with a private investigator and the identical twin sister of one of the vamps (complete with mysterious psychic link) on the trail of the vampire band was never fully developed. I finished the miniseries more out of compulsion than enjoyment. It’s the worst successful Vertigo series I can think of, so much so that I may skip the sequels when I get to their time. The stereotyping of the characters is too strong to overcome the undeniable originality that’s also present. 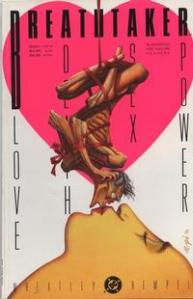 In this period Vertigo did another rebranding with Breathtaker by Mark Wheatley & Marc Hempel. It was originally published by DC as one of their pre-Vertigo “Mature Readers” offerings, then collected as a TPB by Vertigo as Hempel was starting the climactic story arc “The Kindly Ones” in The Sandman. The title character is basically a succubus: she has a magnetic attraction to men, but sex with her robs them of their vitality, aging them rapidly. The twist is that she hates her “power” and tries to resist using it. An interesting premise which unfortunately is muddied by a real-life superhero known as The Man, who makes it his mission to capture her. So she spends much of the first half of the story functioning as a supervillain to his superhero, which I think is a lot less interesting than the reluctant succubus angle. In the end it turns out the title character and superhero The Man are both the result of the same genetic experimental program by the U.S. government: that’s a very contemporary twist (the genetics and the government paranoia both). Still a pretty muddy ending, though. As I recall the TPB collection included a few additional pages at the end to clarify how Breathtaker gained control over her powers. 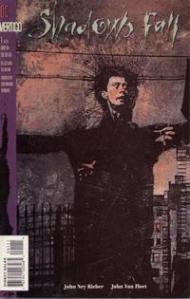 The six-issue miniseries Shadows Fall by John Ney Rieber & John Van Fleet is another Touchmark project. It’s an early use of photo-based illustration, I think. The coloring and manipulation of the photographs gives a painted effect which is well suited to the subject matter. The story is about a man who loses his soul; the soul moves about as a shadow, engineering suicides. If you didn’t read the short text introduction, it would be hard to figure that out. It works as a horror story, but there’s also a mystical angle that I never found completely convincing. Bleak and pretentious as it is, I still prefer it to Vamps, although finishing it was a bit of a slog towards the end. As I continue through my chronological rereading, I observe that when I collected the first few years of Vertigo, I was reading it after the fact. I went through a bunch of it pretty quickly, just enjoying the variety of stories and storytelling approaches. I certainly liked some things more than others, but I kind of suspended critical thinking to some extent. Now I’ve got a much better frame of reference, and so far I’m enjoying the ones I remember liking on first reading. But the ones I was lukewarm about tend to stink the place up on second reading. It’s not that this series is bad, it’s an admirable experiment in some ways. But it’s just so bleak and pretentious, and once again is an overwritten writer-driven project, a pattern I’ve been seeing a lot. Probably could have been an issue or two shorter, as well.